As I mentioned previously, art appreciation is highly subjective and I do not claim to be an expert in any way, shape or form. Appreciation of any form of art is often based on personal experience, moreover, for me personally, I tend to gravitate towards art that is created specifically as a manifestation of beauty to generate pleasure.

Of course, I have also been confronted by art work (3D printed or otherwise) that has been primarily created to make the viewer think about the world around them and/or specific issues concerning humanity and to provoke responses through feelings of shock, awe and even guilt. That is not necessarily a bad thing, however I will go on the record and say that unmade beds, piles of bricks or scaled up 3D printed vaginas do nothing for me.

That’s where I am coming from as I put together a short listicle of my favourite 3D printed works of art, and the pleasure they have brought me, as well as the fun I had interviewing the artist. There is no right or wrong here, as my art teacher used to tell us. I neither want to tell you want to think or that one piece of art is better than another. This is just an exercise in (hopefully) sharing some 3D printed art — and fun — based on my experiences.

In May 2012 I was honoured to be invited to the opening of Neri’s installation at the Centre Pompidou in Paris entitled “Imaginary Beings: Mythologies of the Not Yet.”

The installation was a collection of 18 pieces inspired by Jorge Luis Borges’ Book of Imaginary Beings, which actually contains descriptions of 120 mythical beasts from folklore and literature. Oxman’s selection of ‘beings’ each encapsulates and amplifies the “personalization of a particular [imaginary] human function such as the ability to fly, or the secret of becoming invisible.” 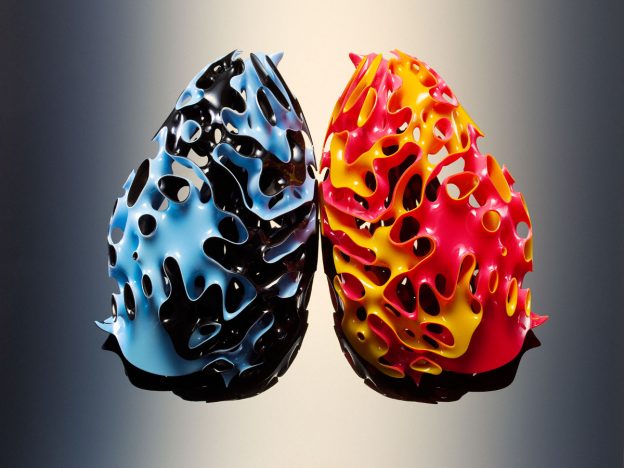 The event itself was prior to the Objet / Stratasys merger and it was an unannounced introduction to Objet’s first foray into colour 3D printing. I got quite excited about the colour at the time, and I can see that this influenced my reaction to the actual art pieces, which were stunning in their own right — I was powerfully affected by the pieces as works of art even without fully understanding the mythological influences. 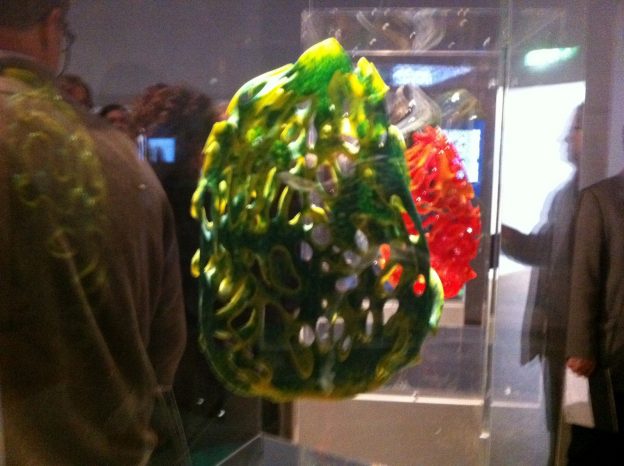 That said, with hindsight it is easier to see precisely how the artistic interpretation of the imaginary beings was wrapped up in the technological advances she was experimenting with to create them — and all of it can be summed up in the “not yet” of the tagline. Despite the evolution of the Connex platforms, the subsequent J750 and the next secret (coming soon), it still applies.

However, Neri’s talent and vision, for me, are irrefutable. this was my favourite but her other stuff is pretty impressive too.

My most recent meeting with Michael Winstone was last year in London. As artists go, he is perhaps the most congenial and down-to-earth artist I’ve had the pleasure of speaking with. There is absolutely no hint of illusions of grandeur and his strong family ties immediately sparked empathy. Moreover, the beauty of his work, I think, speaks for itself and stems from Winstone’s emphasis on nature and the human relationship. 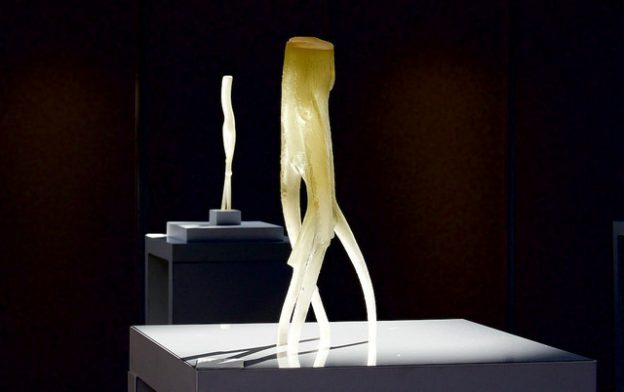 He explained how he finds “simple fractal elements, that are repeated [in nature] to create complex organic structures.” Winstone thus works in the digital realm to explore “the human body within the context of the family structure, it’s relationship with nature, in particular the anatomy of trees and their architecture.”

Ervinck’s work has been prolific over recent years, but my favourites were his 'The Sixth Element' collection, which was unveiled at the end of 2014 in Frankfurt, in collaboration with Neri Oxman and Eyal Gever. This installation captured the five natural elements: Earth, Water, Air, Fire and Life; while the sixth element, referred to in the installation’s title, was referring to “3D printing.” So, even while I found that a tad contrived, if understandable, the works themselves were actually really stunning. 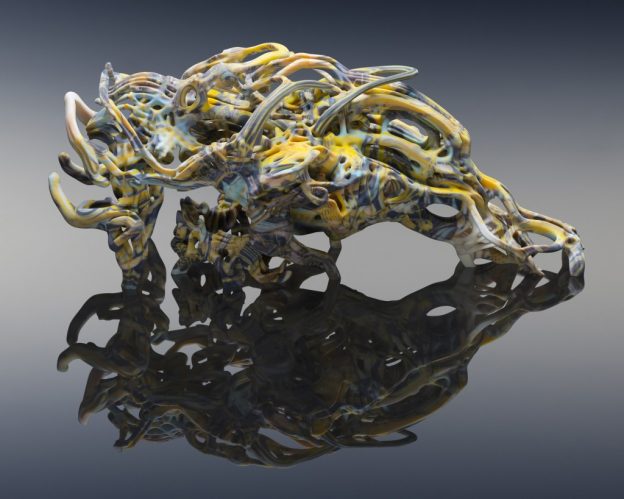 Nick’s artistic creativity is seemingly endless, as testified by his most recent work: WOLFKIAM.

I interviewed Shane in California last year and it was probably one of the funniest, head-scratching interviews I’ve ever done! I don’t mind admitting that I was totally confounded by him, his art, and his language but he made me smile and I just wanted to keep looking at his work! In that regard I guess that makes it successful? 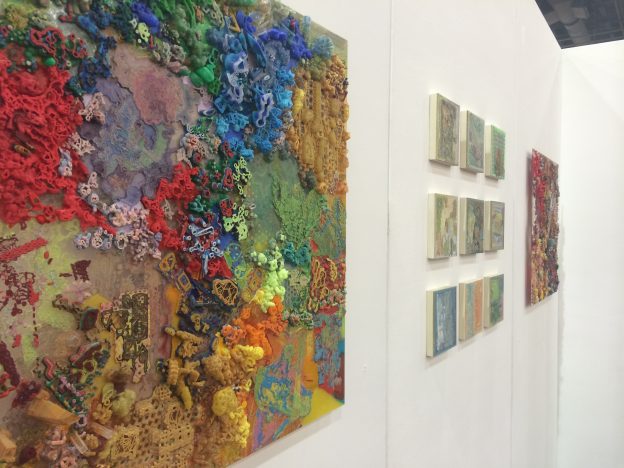 My favourite non-word that he used though was “anythingyness.” I’ve used it myself since. One of the central premises of his work though is how hacking matter happens — and 3D printing visually allows him to explore that.

I have not had the pleasure of meeting Darlene personally, but I have seen her work up close at an installation in London. Her work is exclusively focused on natural beauty, most notably flowers and her talent is self-evident in flawless and breath-taking reproductions she achieves with a multitude of processes, which includes 3D printing. Her 3D printed rose garden just made me happy — every time I saw it, and every time I think of it! 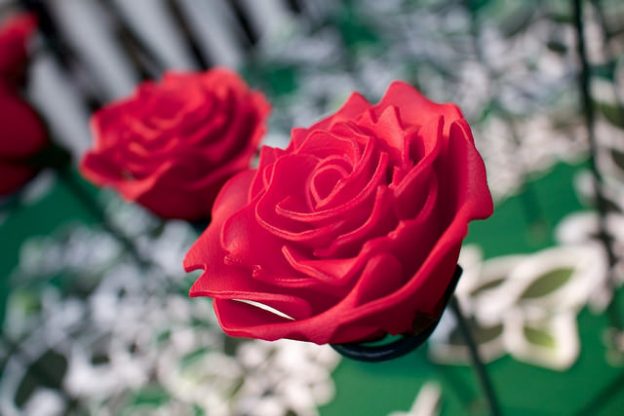 I think my all-time favourite art installation is “Icarus had a sister.” This one is not all about 3D printing, rather it is a hybrid sculpture that blends traditional and 3D printing methodologies. This fact alone makes it reflective of where the technologies are in the real world, and I find that meaningful.

Meeting the two artists behind it, who are also life partners, I think heightened my feelings for this piece. CJ Munn was so completely honest and open, not to mention down-to-earth that I could not help but love her. What’s more, when she told me about her initial and very real fears when she learned about the capabilities of 3D printing, again it reflected the realities of some industrial users — namely a fear of automation and a loss of human value/input as a result. 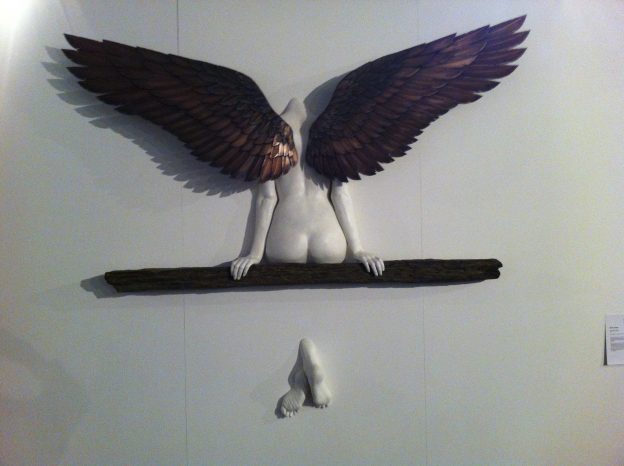 I used to be so afraid we would be like Stepford Wives – replaced by machines and people who reproduce what we do with the click of a button. But it’s much more like being the Million Dollar Man, and waking up with new super powers you can use for creative purposes. Artistically, we are living in such exciting times and the more we explore these new skills, the more imaginative ideas we have. We can’t wait to see where it takes us next!