GrabCAD’s Roots Are In Its Community

Every story starts somewhere, and GrabCAD’s started in Estonia in 2010 as an online engineering employment service matching engineers with jobs. It soon became apparent, however, that GrabCAD’s true strength lay in its online Community and its ability to connect and inspire engineers the world over.

“The original business plan was centered around the idea of connecting engineers to available projects,” according to Mikk Olli, GrabCAD’s Head of Design and one of the company’s first employees. “The first webpage was actually just a form. If you wanted to get a technical drawing, for example, you could fill out the web form and GrabCAD would find an engineer to do it.” 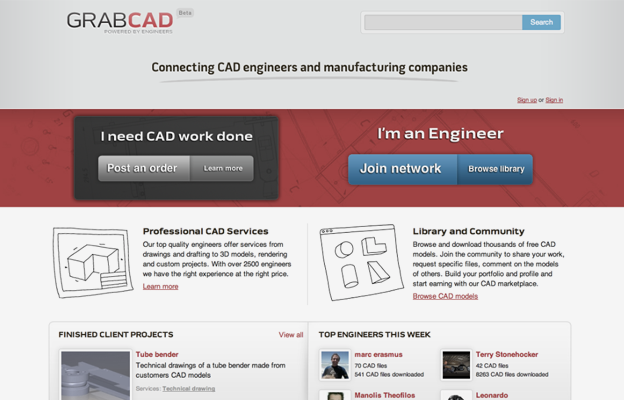 One of the early features of the Community that proved particularly popular was the option members had to post their designs or CAD models for others to see and comment on, which would grow into the GrabCAD Community Library.

“Designers love to show off their work, but there were no good online solutions for that at the time,” Olli said.

That seemingly simple enhancement changed the focus of the young company and a decision was made to focus on developing the online Community so members could better connect and share ideas and content.

The Engineers section of the site allowed members to include biography information and their specific areas of expertise and interests. The options to ask members of the Community questions and post “how-to” tutorials were also added as a way to enhance the spirit of community and education.

In December of 2011, GrabCAD would hit 1 million models downloaded from its Community.

“I was not a member of the Community in the early days, but I had friends who were. They were saying it was awesome,” according to Jon Stevenson, who joined GrabCAD shortly thereafter as its first Vice President of Technology and now serves as Stratasys’ Chief Technology Officer. “It was the only place on the Internet where you could get professional quality CAD models. It was a great place to connect and collaborate with other mechanical engineers that were really passionate about CAD.”

Many of GrabCAD’s earliest members were attracted to that sense of community and collaboration, which is why so many of them still remain active members to this day.

“I used other sites too, but GrabCAD had the advantage of being a Community, with the ability to ask questions, receive feedback on my models, and do the same for other users,” according to Community member  Juarez Felipe Jr., who joined in 2011 under the name trinityscsp and is now the most followed member of the GrabCAD Community. “That made the difference to me. I have also made some good friendships here.”

In fact, it was the early emphasis on the connectivity of the Community and the direct feedback received from members that helped shape and grow what would become GrabCAD’s next offering: GrabCAD Workbench, an online engineering project and CAD collaboration solution.

Next week, in our second blog on the history of GrabCAD, we dive into how GrabCAD Workbench changed the game for CAD collaboration.

Want to help GrabCAD celebrate hitting the 4 million member milestone? Go here to find out how to sign up and take part.