The Future of Engineering and the Importance of STEM Education

Are we running out of engineers?

Working in the engineering industry, and especially for those of you who have school-age children, you have likely heard about STEM, an educational initiative geared to developing skills that will be needed by workplace professionals in the disciplines of science, technology, engineering, and mathematics (hence, STEM). 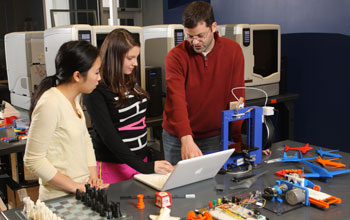 The number of U.S. citizens and permanent residents who earned a master’s degree in STEM fields fell about 5 percent in 2014 compared to its height in 2008.

Here at GrabCAD, we understand the importance of working closely with the Stratasys EDU team to educate resellers, customers, and prospects about 3D printing as a core STEM program component at all educational levels in the days, years, and decades to come.

“Careers in STEM are much more about solving problems than being an engineer or a designer,” notes Gina Scala, Stratasys Director of Marketing for Global Education. “Hands-on, authentic, and problem-based learning coupled with 3D printing is changing engineering, manufacturing, design, and more. Stratasys and GrabCAD are helping engage young STEM students so that they are prepared to impact our world and the challenges our country will face.” But STEM education in American is rapidly undergoing a transformation right before our eyes – and might have a major problem on its hands.

A recent US News and World report article notes that foreign students are now outpacing American students for STEM graduate degrees, suggesting that companies who wish to adapt and keep pace with rapidly changing technologies might need to start importing more and more engineers from other countries in the not too distant future.

According to the report, the number of U.S. citizens and permanent residents who earned a master’s degree in STEM fields fell about 5 percent in 2014 compared to its zenith in 2008; while the number of foreign students on temporary visas earning those same degrees jumped by 35 percent, according to data compiled by the National Science Foundation and National Institutes of Health.

"It's a big concern: We bring a lot of students here, we train them, and then they leave," Vince Bertram, president and CEO of Project Lead the Way, told US News and World Reports. "…We have to continue to expand our domestic pipeline of students going into these areas.”