Bio-industrial designer Megan Valanidas was working on her concept models for the Plastic Exhibition display in Dublin, Ireland. While she was in the middle of pouring and curing bio-plastic gel in her studio, she realized: I need a 3D printer.

For help, Megan reached out to a friend from college who she was still in touch with -- Biniam "Bini" Kebede, GrabCAD’s Software Product Designer.

Megan was able to make the concept models for two of the three exhibit-bound objects in her studio: "The chip bag and the bubble mailer are made using a gelatin-based bioplastic," Megan explains. "I use custom-made forms, to give me control over the surface and texture. I pour the materials onto the form, and then leave them there to 'cure', which refers to the chemical process of hardening and toughening." 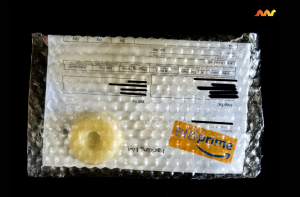 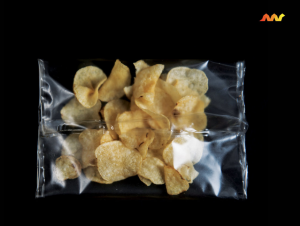 "In the beginning, I was creating my 3D models by turning on a lathe, doing thermal forming and other traditional processing and techniques like casting and wax forming," she explains.

Megan and Bini met and became friends at RISD where they both were grad students studying product design; "So she knew I was working for a company involved in 3D printing and production,” explains Bini.

"I love showing the company's products and capabilities, like GrabCAD Print and GrabCAD Shop, and our amazing Stratasys 3D printers, " says Bini. "This often includes working with people like Megan who are working on projects that involve or can benefit from 3D printing, to showcase what we are capable of doing."

"My Slurpee cup design uses bio-mimetic textures based on an orange peel," says Megan. "This texture gives it more surface area, to speed up the degradation speed, along with tactile information. And it also acts as a label -- the feel is intended to remind you of materials that decompose."

Megan' design files were based on bitmaps from experimenting with oranges. Bini explains, the initial model design file was a scan of a surface, with no thickness.

"This would not result in a viable 3D object -- it wasn't printable as is. So I used the Rhino 3D model printing program to adjust the CAD file to make the surface thicker -- drawing a cylinder shape that fit into the cup so the printed model wouldn't collapse, and would have the thickness and strength that you could hold it.”

“After downloading the CAD file, I used our GrabCAD Print software to make sure the 3D-printed model would be transparent and clear, as Megan was visualizing it, and to confirm that the edited design would be viably printable."

Making it with Stratasys 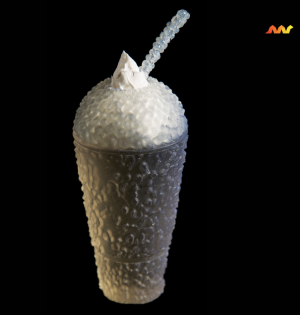 Next, was the 3D printing process.

"I printed it on a Stratasys J750, the 'magic' printer that does multicolor, transparent, opaque and pretty much anything else you can imagine,” Bini says.

The printing was done using a clear resin.

"The model that Bini printed was better than I could have hoped," says Megan. "I was concerned in the beginning, because until now I have done everything on my own from the ground up. This was the first time I asked for outside help, and I was really impressed with the quality."

Of course, having a concept model is still only an early step towards better one-time disposables.

"I have begun talking with various companies who manufacture biopolymers," comments Megan. "I'm very excited about being able to help make a difference like this -- and having great concept models that I can 3D-print are a big help."

Megan's creations are part of the A PLACE FOR PLASTICS exhibition, which is running from October 25, 2019 through February 9, 2020 at the Science Gallery in Trinity College Dublin. The exhibit will then move on to five other cities in Ireland.

As news articles make clear, single-use plastic items (such as plates, bags and straws) do not decompose into simpler molecules. Instead, they remain whole or break up into smaller pieces, which persist in landfills.

This can be hazardous to ground and water ecosystems, and to living creatures that swallow or inhale them. And according to Megan, there is a better way:

We are moving towards a future where all single-use plastics could be made from renewable biomass sources such as shells or recycled food waste. These 'bioplastics' are capable of being 'digested' -- composted -- by marine bacteria and organisms already present in soil.

"It's about working with materials that break down into organic compounds and in a time frame that is compatible with the natural world," according to Megan. "There are very basic chemical structures that most materials can turn into once they decompose."

In addition to creating these bioplastic materials, making packaging and products from them faces two challenges, which were the theme of Megan’s exhibit objects:

"I chose these items based on my research, which is walking down alleys, looking at beaches, in dumpsters, and trying to identify 'iconic trash,'" says Megan. "So, mail, snacks, and drinks." 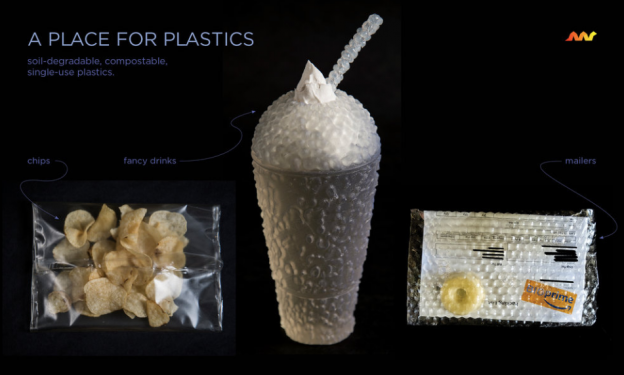 Visit Megan's display from October 25, 2019 through February 9, 2020 at the Science Gallery in Trinity College Dublin

Her exhibit also includes three bio-plastic swatches on a table. "They're in petri dishes containing soil samples from Dublin," says Megan. "The soil is kept damp, so that visitors who come back may be able to see these things breaking down in the soil."