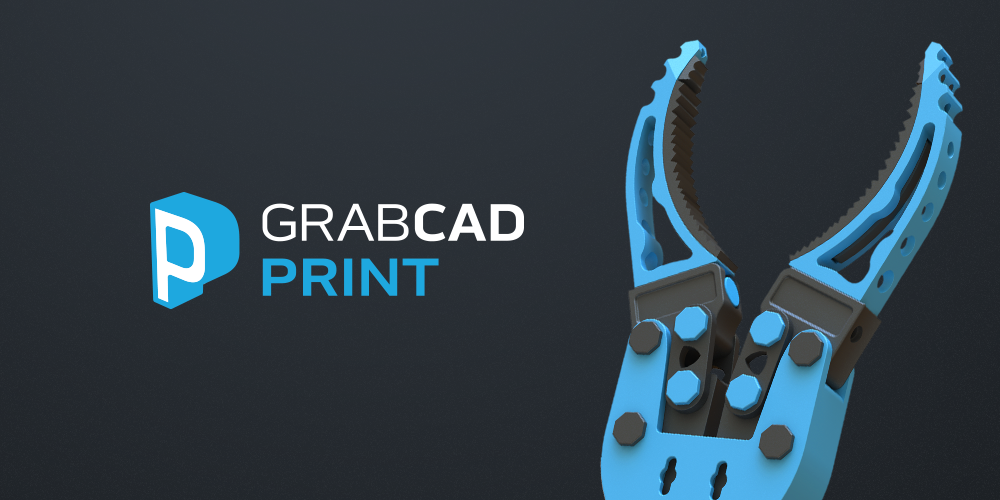 More than 12 years ago, GrabCAD was founded with the vision of providing the tools needed for engineers to manage and share their CAD designs in one platform. The community provided camaraderie for fellow engineers and challenges to grow from. As the number of members grew, so did the goal to meet the needs of the community.

Shortly after the GrabCAD Community’s creation, in April of 2013, Workbench was created for this expanding platform. This tool helped teams of engineers manage, view, and share CAD files simultaneously.

However, in 2016 after being acquired by Stratasys, GrabCAD with their newly added strength would take a leap and create a software solution that continues to be updated to this day. GrabCAD Print would become the natural evolution of not just creating, sharing, and monitoring CAD files, but would grant engineers the ability to bring them into reality through 3D printing.

Here is a highlight reel of GrabCAD Print’s major updates and achievements:

The initial vision of GrabCAD Print was grand. The GrabCAD team wanted to make 3D printing more realistic such as evolving past dated file formats like the STL and towards native CAD files. They wanted to allow 3D printing to also be more accessable to more people rather than just industry leaders along with creating an easy to use solution that could eventually allow for smart connected printers.

The Story Begins: All stories have to start somewhere and during March of 2016, GrabCAD released Build number 0.9.5.164. This version of print allowed for 3D printers to be added and a user to place their parts on a respective tray where they can be previewed, sliced, manipulated, and saved. This is where the .print file extension started. GrabCAD Print Becomes Multi-lingual: On October 12, 2016, GrabCAD Print was able to support 9 different languages along with the capability to provide printer time estimates to users. Designers could also now scale their models by directly changing its overall dimensions rather than having to go back into their respective CAD software. GrabCAD Print Version 1.0: With a month to spare in the year, build number 1.0.32.424 was released on November 15, 2016. Print was now able to support a handful of Stratasys FDM and PolyJet printers in beta. Material volumes were now able to be previewed and ideal print settings were automatically updated for every part added to a tray. Along with the recent compatibility to new printer technology, the list of compatible files grew longer to now include .CMB files and more CAD files, instead of just STLs.

Print version 1.4 - A Software for All of Stratasys Printers: By March of 2017 Print was now able to support every uPrint, Fortus, Dimension, F123 series, and J-Series printers within the printer server (in beta). Further print preparing optimization tools like the “Arrange Tray” made it even easier to prepare jobs. Printers could now have their names customized and the users could also add template printers to preview their parts on a print tray.

Bridging the gap between Workbench and Print: Not long after, in the second week of September, Print was now able to add models straight from Workbench. .Print files could now also be dragged and dropped or double-clicked for easier loading of parts. A Shortcut to use Insight was also added to the start menu which was previously only available from the Apps menu of GrabCAD Print! GrabCAD Print Advanced FDM: The later part of November 2018 brought a toolset that would change the way users could manipulate their FDM parts. Advanced FDM in GrabCAD Print was more intuitive and efficient than Insight and allowed users to create more targeted structures. By simply selecting areas on the design model and specifying desired results, Advanced FDM automatically calculated the required tool path for all layers to produce the required part. This guaranteed that your FDM printed parts came out exactly how you wanted. Since GrabCAD Print’s release, we’ve launched revolutionary software solutions such as GrabCAD Shop which is a 3D printing workflow software for 3D printer operators, engineers and designers. Which helps reduce the time and cost wasted tracking and fulfilling part requests. The latest version of GrabCAD Print. Released right on our anniversary!

GrabCAD has also expanded their platform to include an ecosystem of software providers that have connected to Stratasys technology to provide customers with end-to-end additive solutions. As of this year GrabCAD has also been helping Independent Software Vendors and Customer Developers connect their Stratasys printers to their factory floor with their new GrabCAD Software Development Kit.

For more than 5 years GrabCAD Print has been simplifying 3D printing workflows with its intuitive scheduling, monitoring, preparing, and reporting of print jobs. It has been a core part of GrabCAD along with the community and Workbench since its inception in 2010.

The Future Of GrabCAD

Today the GrabCAD Software team continues to strengthen Print to allow it to continue evolving and push the boundaries of additive manufacturing. With the world moving more towards industry 4.0 and greater access to smart devices through Iot, GrabCAD has started moving towards the future and released the GrabCAD Additive Manufacturing Platform. An open software platform makes additive manufacturing at scale possible through asset management, planning, programming, execution, and quality initiatives. We sincerely thank the millions of GrabCAD Print users and members new and old. We're just getting started on our journey into bringing 3D Printing into Additive Manufacturing.