Well, it’s been almost two weeks since Solidworks World 2014, and after enough times of saying “At SolidWorks World I learned...”, or “I talked to a guy at SolidWorks World who said…”, I thought I should probably write a post about it. But be warned: this is not your typical SWW14 recap.

Given that as Director for Products at GrabCAD I’ve been working pretty heads-down on our GrabCAD Workbench for the past two years, I spent a lot of time at #SWW14 attending sessions on data management and talking to other SolidWorks users about data management. What I learned may surprise you.

There’s just something about saying “data management” that turns off a circuit in most people’s brains. The sessions on modeling tips and tricks were always better attended. People have real, serious problems with having duplicate versions of the same file, sending the wrong versions to manufacturers, overwriting each others work, etc. but it’s not a problem anyone really wants to solve. As one person told me:

“We have thousands of files from 20 years of projects that are duplicated across network drives, multiple hard drives, etc. We hardly ever re-use parts from old projects because no one’s sure where they are or which one was the final version. Even our CAD admin quit after just 4 months because she couldn’t take what a mess our files were in. My boss doesn’t really care, and it sure isn’t my job to deal with it. I’m here to design.”

I attended a session called “File management for beginners” that attempted to teach tips for file management. Some of the key lessons from that session:

1. “Copy everything to a 2nd hard drive so you always have a backup. Periodically zip up all your files and burn on to a DVD so you have a 3rd backup.”

Because I have such great memories of waiting 10 minutes while burning a 700MB CD back in 2000 that I’m really looking forward to doing it with gigabytes of data. This is 2014, who burns discs anymore?

2. “Come up with your own complex part numbering system, preferably with a bunch of numbers and letters for categories, color, purchased/made, etc. Keep track of what the next number is in an Excel spreadsheet.”

5 years from now when you’ve left the company, isn’t everybody going to wonder what the hell all these numbers mean?

3. “Keep track of revisions by either exporting an eDrawing for each revision, by using a separate folder that only contains revisions, or by building your own Access database.”

Have you ever built an Access database? I have and it sucks, I 100% do not recommend this.

4. “Distribute files by sending eDrawings or using a Pack-n-go. Send them via an FTP, Dropbox, Box, or even a flash drive

This is pretty common, but installing eDrawings, setting up an FTP site, or waiting two days for a flash drive to arrive in the mail is a headache nobody wants.

Most people fall into one of three categories

I noticed that while everyone is different, there seemed to be three general types of behavior. I present The Innocent Bystander, The Getting-Educated Worrier, and The One Who Has It All Figured Out.

A lot of people I talked to don’t use specialized tools to manage their files, just a shared network drive and good karma. They try to do some things to minimize issues, but there’s no way management is signing off on buying a big PDM system that costs thousands of dollars to implement. As they don't generally have an IT department it’s not really in anyone’s job description to deal with the problem of data management.

And yes, the reason I make these sarcastic comments is that I was the Innocent Bystander at my last company, Gemvara. I worked at www.gemvara.com doing CAD, rendering (most of what you see on the site), and also trying to manage the thousands of CAD models we had. I felt pretty good when I worked with IT to get our network drive doing automatic nightly backups. I thought my part numbering system was genius. I thought it was pretty cool when I spent weeks building an Access database so everyone could mark when they were working on a specific model. I thought it was a pretty clever to copy all our files to Box so we didn’t have to mail a flash drive to our manufacturers. And then I realized that all of this was taking time I should be designing!

I found a different group of people, usually at slightly larger companies, that knew this wasn’t the best way. They are researching PDM and PLM systems and learning all the features of those systems. They are trying to put together a picture about how this would get implemented into their company and how it would work. The Getting-Educated Worrier has a pretty good idea of what’s up but still has questions like:

At my last company, opening a 2nd office in a different state started the shift from the Innocent Bystander to the Getting-Educated Worrier. Pulling large models from a network drive over VPN is like pulling teeth without novacaine. We got demos from the big vendors and despite how customizable all these systems were, they seemed to have a thousand features that we didn’t need and precious few that we did. Plus they were expensive! So ultimately we decided to build our own custom system - essentially copy the aforementioned Access database into a real software system. Building that system took more than two years and turned out to be a real headache. And yes, for those who are curious, this is precisely why I came to GrabCAD - to save the Gemvara’s of the world from repeating these same mistakes.

THE ONE WHO HAS IT ALL FIGURED OUT:

Yep, this is the person that everyone else is jealous of.  Years ago, their company realized that this could become a serious problem, and they actually put time + money to solve it before things got bad.  This is the person who:

And yes, I did talk to this person and he’s done a damn fine job. This guy is like Tom Cruise in Top Gun. He was the envy of everybody at the lunch table. He did admit “I’m not a CAD guy anymore, I’m really an IT guy”. So it’s not all roses, even for him.

SolidWorks World was amazing - I talked to a huge number of people at all different stages of dealing with data management. Fewer than I expected were happy with where they were, or what they saw as their options.

Of course I’d love to tell you GrabCAD Workbench will solve all of your problems, but it won’t. You’ll still need to figure out a strategy, you’ll still need to get people on board, you’ll still need to make changes as you grow. But if you’re an Innocent Bystander, I highly recommend you think about getting going before your data problems get worse. If you’re the Getting-Educated Worrier, I invite you to worry about a few less things (hardware, upfront costs, and ongoing maintenance to start). And for the One Who Has It All Figured Out - go have a beer, man, you deserve it.

And congratulations to SolidWorks for throwing such an amazing show, and building such a passionate and amazing set of customers! 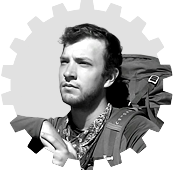