The GeoOrbital Wheel is a pretty awesome new product redefining the way people bike. At its core, it’s basically an electric wheel for a standard bike inspired by the movie TRON and built by literal rocket scientists. GeoOrbital claims that their wheel can turn your ordinary street bike into a suped-up electric version in under 60 seconds!

Since it’s National Bike Month in the U.S., and since they’re innovating their product in Cambridge, Mass., just down the street from GrabCAD, we decided to get together with Michael Potts, GeoOrbital’s marketing manager, and talk engineering, marketing, and startup life.

Dave Moran: Michael, you’ve called the idea for the GeoOrbital wheel an “engineer’s dilemma.” How did that idea come about in the first place, and why did it prove to be such a dilemma for an engineer?

Michael Potts: I’m an engineer, and when I saw the wheel for the first time two and a half years ago when Founder and CEO Michael Burtov, a non-engineer, first showed it to me, he didn’t come at it from an engineering efficiency perspective. He came at it from an “inventor’s” perspective of, “why can’t you make a wheel that contains all the components that will make it move?”

So he built one on his kitchen table. It was  a sub-scale prototype, but it showed the concept. He filed for a couple of patents, and then got together with a real engineer, our CTO Dakota Decker, to start making it into a product. Dakota ended-up leaving SpaceX to build it and make it manufacturable.

Dave Moran: So what was the hurdle in taking the GeoOrbital Wheel from idea to prototype to market?

Michael Potts: The hurdle is you’re trying to do things differently. If you do things differently like us, you need to modify conventional components like motors, and drastically increase the RPMs’ as we are spinning the rim and not turning the hub, like everyone else was doing before we came around. We also went from a standard direct drive to a drive system that mimics the tire-to-road contact that you see in traditional bicycles, so surface conditions and part profiles that are not usually critical became so. 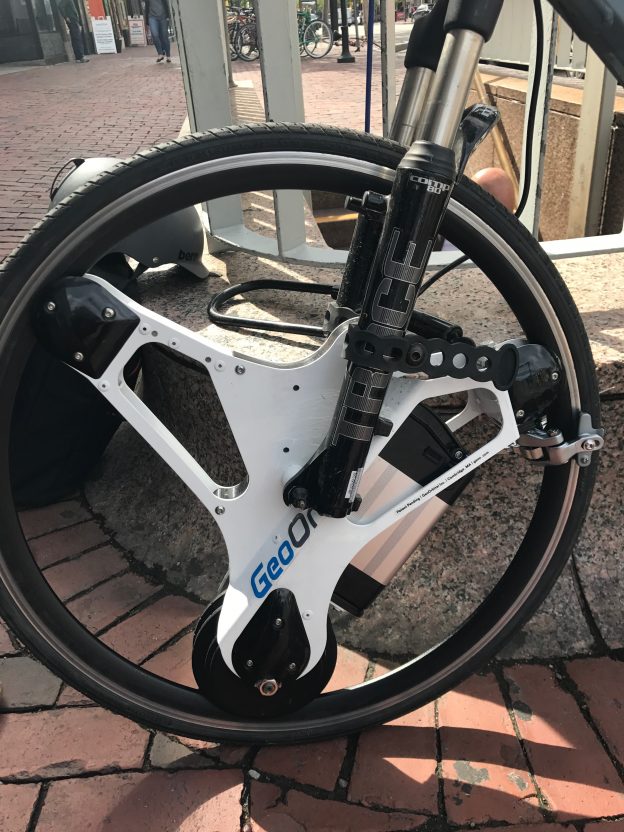 Inspired by the movie TRON, the GeoOrbital wheel is an electric replacement wheel for your standard bike.

Dave Moran: What differentiates the GeoOrbital Wheel from some of the other electric bike products on the market?

Michael Potts: We want to be a wheel company. We don’t want to be an eBike company. There are enough ebikes in the world, and some of them are really excellent – expensive, but excellent. We went on a mission to take regular bikes and turn them into “pedaling optional” bikes in the most affordable and easiest way possible. There are over 1 billion regular bikes in the world and we set out on a quest to make them into affordable electric vehicles. Another big differentiator is that the wheel is a high-quality U.S. product. It’s built in Peabody, Mass., in fact.

Dave Moran: What were some of the engineering challenges of developing the wheel?

Michael Potts: Well, there were a lot of challenges, really, the entire wheel is a radically different design and construction. We didn’t have the luxury of improving a previous design. If you pardon the pun: “we had to reinvent the wheel.” One very interesting challenge was how to counteract the torque generated against the bike. The team came up with a very clever little solution that protrudes from the  wheel and latches on with the use of rubber straps.

Dave Moran: Wow, it really does sound like you’re trying to reinvent the wheel!

Michael Potts: Yup, sure are! Or as Michael, our founder says, “we’re reinventing how people see the wheel!”

What’s most interesting is that we have a competitor in the “reinvent-the-wheel” space, also based in Cambridge. They’re an MIT spinoff that’s improving on decades-old technology, have raised a lot in funding, took five or six years to go to market, but are just entering it now. It’s a space that’s getting a lot of attention, and a lot of very smart people see value in it. What makes it exciting for us is that we’re a bunch of hackers founded by a serial entrepreneur and inventor, who built and launched much more successful products with barely any funding in a fraction of the time. That’s the power of a truly good idea!

Dave Moran: What powers the wheel?

Michael Potts: It’s battery powered like most eBikes right now. Our wheel is composed of a 10-amp battery and a  500-watt motor at 36 volts that can give you about an hour of power at normal bike speeds (it can go about 20 miles per hour). Depending on how heavy you are, depending on the terrain, you can generally get about 20 miles on the wheel without pedaling.

The reality is, if you just want your bike for exercise and you don’t need the GeoOrbital wheel, you can use your regular wheel. We’re trying to take your regular bike that you don’t use very much and help you use it more – so all those excuses you have right now for not using your bike can go away.

The sweet spot for a bike ride is five to 10 miles. We’ve purposely targeted urban commuters so that we can get into the biking space. Our customer base has people in their 50s and 60s that like the idea of exercise, but are afraid that they might run out of gas halfway out and end up stranded. They can now get excited because they can now go on longer bike rides!

Dave Moran: Michael, you’ve been around startups for quite a while. Is it typically the better idea that wins or the one that gets to market the fastest?

Michael Potts: Any venture capitalist will tell you, it’s the team that can get to the market quicker and get it into revenue that will scale. There’s lots of great ideas and patents just sitting there, there’s lots of teams not executing on good ideas, but a team that can leanly go to market flies.

Dave Moran: Are you profitable yet?

Michael Potts: YES. We are in the black. But we need to sell more wheels to really scale! Since market launch last May, we have had $1.8 million in gross sales.

Dave Moran: What’s the next steps for the GeoOrbital Wheel?

Michael Potts: The next step is to raise more money so we can scale faster. We went the Kickstarter route last year, and got a really good pull out of that. We got millions of pageviews, the largest single video campaign had 26 million views, so we sort of know how to take our product viral. We’re doing equity crowdfunding now to really build our community and get the funds that we need to scale directly from our community.

We know that somewhere between $1 million and $3 million in funding is the right sort of number for us right now. It gets us a good runway to do some product development, it gets us into an international space, and we can then scale the business through sales.

We are also building on our original crowdsourcing success with a campaign right now on StartEngine.

We’ve shipped wheels to 50 different countries, and had a globally sourced Kickstarter campaign, but we’re currently focused on scaling domestically in North America for the rest of the year. We are currently running a pilot with Best Buy and we’re hoping that can help us scale.

Dave Moran: And your role at the company?

Michael Potts: I’m GeoOrbital’s Marketing Manager, so I tend to all their digital feeds. We’re a team of a 28-year-old who does the engineering, a 38-year-old who founded and leads the company, and a 58-year-old who posts to their social media. So we’re sort of reversed engineered in a lot of ways!

Dave Moran: After researching bike startups this week – many of which are actually based in the Boston/Cambridge area – I think I've come to the conclusion that a lot of startups have a marketing and messaging problem. If I go to your website and I can’t tell exactly what product you offer and why I might be interested in buying it in under 30 seconds, I think you’ve failed to effectively market your product to me.

But I could not say that when I first visited the GeoOrbital website. I was able to find out fairly quickly what the message was, and whether or not the product was actually for me.

Michael Potts: With the Kickstarter campaign, we found messaging that was effective and has even been borrowed repeatedly by competitors. We do try to communicate clearly.

What’s exciting for us is that we’ve been able to move fast. It’s so hard to get a hardware product out of the box, out of the prototyping, into manufacturing, and then scaled.

Dave Moran: One of the biggest issues we face here at GrabCAD is finding the “talent” that best suits our needs in the competition Boston space of software engineering. In our case making 3D printing software for Stratasys printers, the hardware. You’re essentially a hardware company. How do you solve your talent problem?

Michael Potts: You can only get talent in the engineering world if you can pay for it, so if you’re a startup you have to hustle it at first and make people believe in your idea. Michael Burtov picked up the talent of Dakota Decker by offering him a share in the company to build the future. It only takes a couple of the right connections.

Our organization will always hire on fit more than skill. We can control the environment, because it’s pretty narrow. If the fit isn’t there, you can’t do the work. It just gets in the way.

If you're a cycling fan yourself, there's TONS of cool biking-related CAD models to be found on the GrabCAD Community Library.