If you pay attention to the mainstream media, you likely think of Tesla as some promoter of technological advancements. The truth is much more sinister, because it seems the California automaker and tech giant is keen on taking down rival technologies with a vengeance. 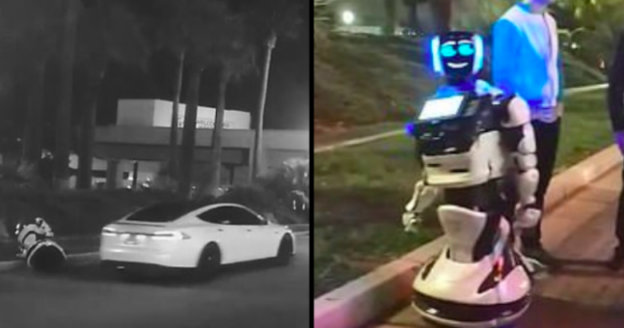 At the Consumer Electronics Show or CES recently, we saw an egregious example of the vicious Tesla far too many are ignoring.

Cruising down the side of Paradise Road on a clear night was Promobot’s V.4 model. The autonomous robot was minding its own business, heading to the company’s display booth before CES started, when a Tesla Model S in full-self-driving mode sideswiped it. Apparently, Tesla will keep us safe from the robot overlords taking over society.

According to Promobot, the V.4 is actually a peaceful and helpful robot. It can recognize people, communicate on a variety of topics, etc. The company rents them out for a mere $2,000 a day to work as hostesses, concierges, guides, and so forth. In other words, this robot could be pointing you towards the best nightlife spots on your next vacation or showing you around an art museum.

Promobot is a Russian company. It currently offers the V.4 and the V.2. I’ll bet you can’t tell which robot is more advanced. Both models have been created to take your job, especially if what you do is simple and boring. The whole point is for companies to cut down on labor costs and supposedly improve service, because I’d rather order a drink from a lifeless machine than a smiling human being.

How did it happen?

Now, there are a lot of questions here. First off, why was the robot in the street? No sane human would go waltzing in a lane of traffic at night for the very reason why this protocol droid got creamed.

Then there’s the legality of the situation? When one robot murders another, who’s at fault? I can only imagine the insurance claim on this one.

Technically this incident wasn’t a hit-and-run. The Tesla Model S did stop a short distance after striking the robot, even though there was only a passenger onboard. Promobot said it was too late, because the V.4 was “dead.” Exactly how the mortality of robots works is a complex engineering topic I’ll leave up to the experts, because it’s well beyond my sphere of knowledge or ability to entertain seriously.

Even more troubling is the claim that the Tesla was in the full-self-driving mode. I’ve used Tesla’s Autopilot and can tell you from personal experience there’s no option for not having a driver behind the wheel. In fact, the car prompts you to firmly grasp the steering wheel periodically to prove you’re paying attention, otherwise, Autopilot shuts off. So, the claim that a passenger was sitting in the Model S as it drove itself on the road is pretty dubious.

This is starting to sound planned...

Even fishier, Promobot immediately posted a black and white video of the accident almost immediately after it happened. The shot is set up to appear like a surveillance video, but it’s so close to the action that this detail alone should arouse suspicion. But, if you watch the video closely, the Model S doesn’t seem to rock swerve, or brake in any way right before striking the robot or even at the moment of supposed contact. The camera angle is from the other side of the car, so you never see the Tesla actually hit the robot, just the car passing it by and the robot fall over immediately afterward. Adding to the weirdness of the video is the fact the Promobot V4 was just sitting completely still from the beginning of the video until the Tesla drove up to it, despite the claim that the robot had wandered off down the road. And, almost immediately after the robot fell over, someone came running from off-camera to put the robot right-side-up. Guess which direction that person came from? Roughly the area where the camera was positioned.

It doesn’t take a van full of kids and a dog to solve this mystery. There’s a reason Promobot has the term “promo” or short for “promotion” at the beginning of its name. This company obviously knows its stuff when it comes to PR stunts. The media absolutely gobbles up any incidents of a Tesla getting into an accident or catching fire. Promobot was banking on that happening here, giving the brand name plenty of national and international exposure.

This isn’t the first stunt pulled by Promobot, by the way. About two years ago, a robot from the company’s headquarters in Russia got on the loose like some scene from Short Circuit. The result was a robot charging across multiple lanes of traffic, causing backups that I’m sure made everyone involved quite happy. The coincidence is pretty suspicious.