You likely have at least some sense of big changes coming to the automotive industry. Most people know about Tesla, but other young startups, plus a plethora of other companies are in the process of disrupting our personal transportation options. As a result, we’re about to see what I term the Carpocalypse. 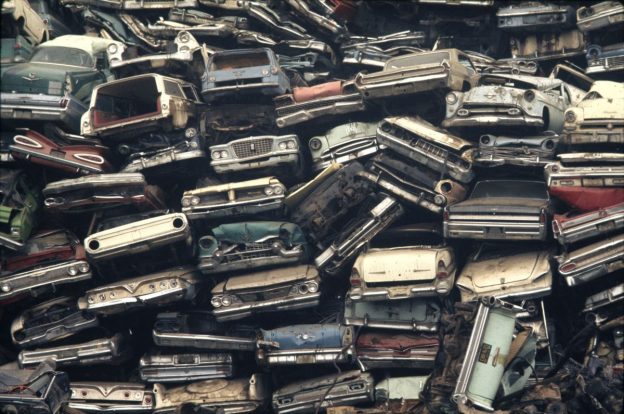 In this Carpocalypse, a number of automotive brands you know and might even love could go away forever. It’s happened before and very likely will happen again in the near future.

Naturally, some people automatically balk at the idea of a Carpocalypse. After all, for most or all of their lives, the same few automakers have dominated the market. But it wasn’t always that way.

In the past century, just in the United States, a number of automakers have gone the way of the dodo. For example, back in the 1920s, Duesenberg was the brand celebrities and others awash in wealth favored. Today, Duesenbergs are hard to come by. Other automakers like Kaiser, Studebaker, American Motors, Willys, Checker, Auburn, Tucker, Imperial, Vector, and plenty more have been junked.

With this kind of precedent, there should be zero argument that today’s automakers won’t live forever.

What exactly will cause this mass exodus of current automakers? There are a few factors, but one is a growing crop of aggressive and savvy startups. Of course, everyone automatically points to Tesla. It’s a good example, but there are many others.

Just here in the US are several companies which could upend everything in this market. For example, Atlis Motors revealed its all-electric XT pickup truck, which can go 300-500 miles on a charge. Using a special charging station, the battery replenishes in just 15 minutes, and Atlis says it’s on the verge of breakthrough tech for a sub-5 minute recharge time. If that’s not enough, the XT can tow up to 35,000 pounds and haul up to 5,000 pounds in the payload.

There’s a saying in business that you don’t go for competitors’ weaknesses as the new kid on the block. Instead, you hit them in the soft underbelly or the area where they’ve become lax yet have so much to lose. That’s exactly what Atlis, Rivian, Workhorse, and others are doing by making electric pickups and SUVs. Those are the cash cows for the Big Three, yet they continually say electric pickup trucks are decades away. These big guns aren’t viciously protecting their big moneymakers like you might expect.

By their very nature, startups are more agile than big companies. It’s like the difference between a roadster and a cruise liner. These young companies might not have the financial clout of their competitors, but that can change in a hurry as they adapt quickly to what consumers really want.

If you don’t think the big automakers feel threatened, consider this: Ford executives just announced last week that not only is a hybrid F-150 in the works, so is an all-electric version. The F-150 is often a feature incubator for the Super Duty line, so expect the same offerings for those pickups shortly after. Make no mistake, this is a direct response to these startups’ trucks, plus the fact Tesla is working on a pickup.

Traditional automakers have some well-funded competition in addition to these startups. Other companies are jumping into the market, posing another kind of threat. Among the upcoming entries is Dyson, which is far more than a vacuum company, and Apple, one of the most powerful corporations in the world.

Admittedly, it’s not easy to make cars. Tesla has found that out the hard way, but the California automaker has also made exceptional headway. Other companies can learn from that, or they might team up with seasoned but small players in the industry. For example, Karma formed a partnership with legendary coachbuilder Pininfarina recently.

Who actually enjoys blowing a few Saturdays looking at cars, finding one that works, then arguing about pricing with some pushy salesman and the sales manager? Unless you’re a complete masochist, you dread car shopping.

I recently had the pleasure of taking a Tesla for a test drive. It was one of the smoothest dealership experiences of my life. Granted, they couldn’t sell me a car because it’s not allowed by state law, but I’ve looked at them in other regions with the same vibe.

Some automakers and dealerships seem to get that things need to change. In some large metropolitan areas, shoppers have been able to order a test drive where the car is driven to where they are. This on-demand service could become a growing trend, negating the need to travel where huge parking lots filled with cars reside. Carvana keeps vehicles in a giant “vending machine.” Some traditional dealers make fun of these practices and call them gimmicks, but the tube men and giant inflatable gorillas are clearly a smoking gun.

One area of the world where the Carpocalypse could take a different shape is China. Government protectionism is very much alive and well there, which is why so many sub-optimal automakers exist in the country. While an upending in the market will be playing out elsewhere, those effects could be severely muted for Chinese automakers.

Exactly which automakers could fall? It’s difficult to predict such things with accuracy since much can change quickly. Elon Musk has said Tesla will be the death of Ford, and maybe that turns out to be true. General Motors certainly is in a precarious position at the moment, and Fiat Chrysler hasn’t been responding to future market trends as quickly as might be necessary. Hyundai and Kia have suddenly become quite vulnerable as well. Jaguar Land Rover has struggled with sales, although the brands have embraced technology more fully than many others.

At this point, it seems like just about anything is possible. What seems certain is several brands we might love and cherish now could become nothing more than a part of history in the near future.