Glaucio H. Paulino is a professor at Georgia Tech's School of Civil and Environmental Engineering. He bears a title unique to academia, unique to conventional innovative practices, and unique, perhaps, to the coming wave of new forms, shapes, and designs -- made possible with 3D printing and material technologies. 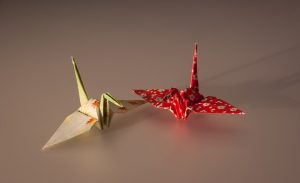 Paulino is, for lack of a more appropriate term, an origami engineer.

“What we have here is the proof of concept of an integrated system for manufacturing complex origami. It has tremendous potential applications,” says Paulino.

Origami’s time has come as a useful fabrication method. It combines material science and geometry with the wonderment of 3D printing. It yields new structures, unique designs, and brand new paths to strength and durability.

Rambling wrecks from Georgia Tech, aren't so rambling these days, and they aren't such a wreck. Instead, they are rather orderly now that they've become the first university in the country to offer a course on origami engineering. And they’re using the ancient Japanese art form to blaze new trails to create unique structures from a lineal order of an ordered set of objects.

Origami has gone academic -- and technological.

Until DLP came into prime time, it had been difficult to use 3D printing to create hollow structures. The complex geometric patterned shapes that origami makes available, are intricate. They require more specialty materials, which can't be folded like ordinary paper.

The fabrication began almost five years ago when Paulino first made unique structures of paper and glue. Now, some years later, they're made of a polymer and pumped out with precision, thanks to a 3D printing process that makes it looks like the structures are being produced from a supernatural source.

H. Jerry Qi, is the Woodruff Faculty Fellow in Georgia Tech’s George W. Woodruff School of Mechanical Engineering, and comes to Georgia from Daining Fang of Peking University and the Beijing Institute of Technology. He has partnered with Paulino in the published research that outlines the technology.

“We wanted a material that is not only soft, but can also be folded hundreds of times without breaking,” said Qi. Folding hundreds of times is precisely what makes the newly fabricated structures so unique: they hinge. That is, they are able to fold, with creases, characteristic of an origami structure.

The newly DLP printed structures that may start with more simplistic "zippered tubes." The tubes then become units of construction, carefully combined, according to a design, to become a more complex structure such as a bridge. The resultant structures have been able to bear weight one hundred times greater than the weight of the structure itself.

The origami-like folded configurations could be folded and unfolded, without any sacrifice of material; they are durable and last. Structural engineering has found an entirely new innovation.

“I have a piece that I printed about six months ago that I demonstrate for people all the time, and it’s still fine,” said Qi.

The Japanese art of origami - derived from "our" (fold) and "kami" (paper) is the base of this new innovation that is a baseline for so many things to carefully crafted: medical products, unique structures, and perhaps even larger-scale structures, among others.

Paulino, perhaps the world's first origami engineer at the university level, and his research colleagues, have created ground zero for new structural design, made possible by the uniqueness of 3D printing, to create new structures, never before thought possible.