The age of hard drives has come and gone; the time of solid-state drives (SSD) is upon us. We made this point with our kick-ass workstation recommendations a few months back, but a few of you were understandably skeptical. As engineers we have a special affinity for reliable technology, but such respect is not so easily earned. So are SSDs reliable? Let’s end that debate and understand that it’s well past time to chuck those hard drives. Yep. In the trash. See you in hell, magnetic platter. 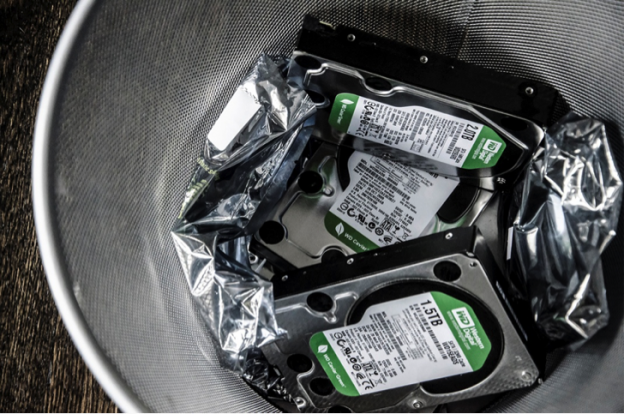 All hail the Performance King

Even the fastest spinning hard drives are wholly outclassed by today’s average SSD performance. A rather esoteric enterprise class 15k rpm hard disk might eek out 170MB/s with seek times hovering just under 4ms. You might be able to push that past 200MB/s using RAID 5 going downhill with an ample tailwind (provided you make the appropriate whooshing noises, of course). Even some of the newer drives that use helium to reduce platter friction or cram unprecedented data densities with Shingled Magnetic Recording (SMR) only manage 150MB/s at 4.0ms access times.

In comparison, your average consumer SSD can easily manage 500MB/s transfers with just a .1ms access time. That’s right, with no moving parts, there’s no such thing as a seek time. SSDs are so fast in fact that the right setup can saturate your entire SATA bus, which has led to even more fanciful Non-Volatile Memory Express (NVMe) flavors of SSD that plug directly into a PCI Express lane on your motherboard to deliver an eye watering 5550MB/s. Ludicrous speed, indeed.

It should be no surprise that replacing a magnetic hard drive with an SSD is the single most cost effective upgrade to give your old CAD workstation a serious kick in the pants. Price per GB is of course higher for SSDs, but the cost continues to fall. 1 TB SSDs are already in the $300-400 range.

While SSDs have a clear performance advantage over conventional magnetic drives, there’s still consternation about reliability. Is it true that each block of NAND flash memory can only be erased a finite number of times before it fails? You betcha. But what does this mean for reliability? To you, absolutely nothing. Let’s understand why. First of all, it takes a really, really, long time for NAND block failure to become an issue. That’s because modern SSDs use a variety of technologies to manage how your SSD ages including:

But here’s the real shocker, your magnetic drive degrades over time as well. Hard drives are subject to fragmentation, which reduces performance over time. Fragmentation is an irrelevant concept for SSDs as it takes the same amount of time to access any given memory block. Hard drives also develop bad sectors either due to heat, magnetic degradation or physical damage from vibration or sudden movement. SSDs are much more resilient to physical damage and produce much less heat, again, as there are no moving parts.

How long do SSDs last? The two SSDs used as my boot and primary program drives on my workstation (which typically runs 10-16 hrs/day) have worked flawlessly over 5 years. During that same interval, I’ve amassed a graveyard of dead magnetic hard drives on my server (though that does run 24hrs/day). Since anecdotal evidence likely won’t satisfy your engineering sensibilities, check out this Tech Report study that took several SSDs and punished them with writes until they died. All of them lasted several hundred terabytes worth of writes, and others exceeded two petabytes. That’s the equivalent of hundreds of years of average disk use.

So SSD longevity shouldn’t be questioned. Now, it’s important to mention that failure modes do differ. Hard drives tend to have a softer failure mode, where bad sectors mount at an accelerated rate before the drive becomes inaccessible. Well, most of the time. A catastrophic head crash can still cause insta-death. When SSDs fail, they tend to just stop and do their best impersonation of a brick. So if you’re intimately concerned about the integrity of your data, you need to be making regular image based backups and monitoring your SMART data on a daily basis whether you have an SSD or not. If you’re not doing so, well you’re just asking for it.

Off to the magic cylinder

Now that you realize it’s time to trash those clunky old magnetic drives, it’s certainly understandable if you balk at the environmental impact of doing just that. In fact you shouldn’t just chuck your drives in regular trash or feed them to wildlife at all unless you’re some kind of monster. Most municipalities have electronic recycling programs for just that sort of thing. But there’s a dilemma with that as well.

If you want to protect your privacy, you need to ensure data is erased. You can use something like Darik’s Boot and Nuke (DBAN) to wipe information but that requires a working drive, and you still might be paranoid. The paid version of DBAN, Blancco, can erase data to a degree that is satisfactory with DoD 5220.2M. And if you’re tin-foil hat paranoid, or just want to have a little fun, there’s an infinitely more entertaining end game for your magnetic drive: wind chimes.