Will the next CAD be a game?

Shall we play a game? Aside from global thermonuclear war, that is. Regardless of your particular opinion on cloud delivery, subscription models, and military supercomputers named after Burger King sandwiches, CAD is becoming widely accessible to both classically trained engineers and non-engineers alike. With such newfound exposure, an interesting challenge arises. Is there a potential to further harness the creativity of everyone into engineering design? And how does that affect what we know as engineering? Might the next evolution of CAD evolve into a game? It's not quite as ridiculous as it might sound. 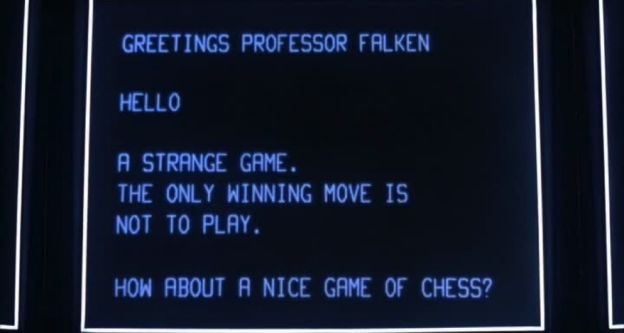 The concept of gamification (attributing game elements to non-gaming activities) is not a new one, though it's not without some level of controversy. Gamification in engineering (if it exists at all) rarely seems to entail much beyond simplistic Points, Badges, and Leaderboards (PBL) grafted onto existing software tools or processes. It's not surprising that such narrowly scoped implementations have about the same overall utility as an acoustic coupler might have these days.

But before you dismiss gamification to be about as realistic as Matthew Broderick war dialing chatty mainframes presiding over nuclear arsenals, there's huge potential for gamification to be much more than that. Video games – PC games in particular – have come a long way from their simplistic pixelated and/or text-based forbearers. We're quite a bit beyond tic-tac-toe these days. While there are many titles both modern and ancient that are little more than twitchy, they’re still fun experiences ideally suited for refining your motor skills. The strength of the gaming space is in its diversity.

Of particular interest is a growing genre of titles that challenge players to solve difficult, multi-faceted problems or provide sandbox environments where creativity is the only practical boundary. Sound familiar? CAD and gaming may very well be on a collision course.

A plausible excuse to justify another Steam sale

Two games in particular, serve as excellent examples of what might be possible in a future of gamified CAD. Take Kerbal Space Program and SpaceChem, both of which are fascinating as both a gamer and an engineer. Either title requires quite a bit of applied creativity in solving what are essentially design problems, and consequently are often categorized among the most difficult games out there.

In Kerbal Space Program, you literally run your own space program, balancing funding, research, and the lives of your astronauts, while designing your own launch vehicles that you test in a fairly robust physics simulation, complete with a respectable orbital mechanics model. While the subject matter is actual rocket science, the game makes complex, multi-dimensional problem solving both entertaining and approachable. While it's not meant to be perfectly realistic, it certainly is representative of the design space. For a taste of what's possible, just look at this crazy thing.

SpaceChem is more compact in scope, but no less fascinating. Billed as a game about fake chemistry, the objective in SpaceChem involves assembly of specified molecules through a logical chemical process of your own design. Machine design is accomplished by arranging two layers of program commands into a spatial grid. Your resultant chemical process has to operate within the confines of a given design space, and be efficient to boot. And yes, things can get rather complicated.

Engineering is not a game

A plausible reaction to the very concept of CAD gamification is upholding the idea that engineering cannot be trivialized into something so frivolous as electronic entertainment. No one's suggesting turning engineering itself into a game, so if you're planning on raging on that particular angle, take it up a DEFCON or two.

But consider this: as the sophistication of gaming increases, design spaces (i.e. defined boundary conditions across a variety of domains in an engineering problem) can eventually be modeled generically. It will become possible to overlay information across multiple disciplines (for example load simulations, volumetric constraints, fluid dynamics, electromagnetic effects, etc.) into one malleable environment.

By doing so, one can essentially create a purpose-driven sandbox to solve a particular design challenge. Consider it an evolutionary step beyond the design challenges featured right here on GrabCAD, for example.

There is tremendous value to exposing a wider audience to aspects of tough engineering problems, be they engineers or not. And so it's reasonable to expect that as CAD tools become more accessible, such a crowdsourcing approach will gain momentum. And despite recent controversy, the role of an engineer is no less relevant in such a future state. An engineer must still define the design space, and validate the practicality of the solutions, it's no different than using a software solver for load path optimization in CAE. Except now the optimizer is potentially all of human imagination and creativity. That's so wizard.