Of all the engine designs in the world, few fascinate like the rotary. Even though other automakers used rotary engines in the past, Mazda has become the overall symbol of rotary power. After all, the RX-7 and RX-8 are legendary vehicles, standing apart from most other sports cars and generating showers of praise.

The one big question plenty of automotive enthusiasts ask is why Mazda hasn't made a replacement for the RX-8? In reality, the answer is complicated. 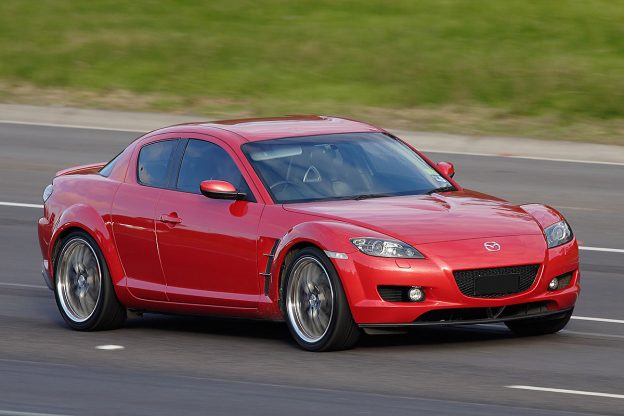 Despite being technological wonders and great for exhilarating performance, the rotary engine comes with a healthy set of problems. These have doomed the design to take an extended hiatus from the market. Some are still holding onto hope that Mazda will find remedies.

If you're not familiar with rotary engines, just know they still draw in a mixture of air and fuel, compress it, ignite the mixture, and let the resulting exhaust gases escape. All this is done at the same time, because different parts of the engine are in the different stages of combustion. The result is smooth power delivery, plus loads of output from a small block.

With fewer moving parts, because of a lack of valves, camshafts, and such, you would think the rotary engine is more reliable. That's a basic engineering principle: less complex designs tend to break less often.

One of the biggest hits against the rotary engine is emissions. By design, a rotary burns oil, which is horrible for air quality. Oil squirters in the intake manifold and combustion chamber are the source of this problem, but they're necessary for the engine to run properly. It also means owners must check the oil level faithfully, which some forget and disaster strikes.

By nature, the rotary engine doesn't lend itself to proper sealing. Without this, you don't get sufficient compression, and that's bad for performance. All around the rotor are zones of different temperatures, thanks to the unique design, which makes sealing everything up with metal-on-metal essentially impossible. Sure, coolant jackets help to manage the situation, but they don't entirely solve it. This problem affects both fuel economy and emissions, so it's not something you can just ignore.

Rotary engines aren't known for being efficient. The sad truth is a Corvette of the same year as an RX-8 gets better fuel economy. That's with a larger V-8 engine that makes more power. Low thermal efficiency, based on the long shape of the combustion chamber, contributes to this problem. Often not all the fuel is burned, causing backfires and obviously not helping with fuel economy. It's easy to see why in this age of the quest for lower fuel consumption, people would balk at anything that stands in the way.

The Mazda RX-8 has its own set of unique ailments, which left a bad taste in the mouths of many owners. For example, the catalytic converter has been known to fail prematurely, thanks to the coil packs wearing out quite early. In some cases, the plugged-up catalytic converter can trigger serious engine damage. If drivers aren't too careful, shutting off the car right after you start it up can flood the rotary with gas. That means a ride on a tow truck to have it de-flooded.

It's understandable why, with all these problems, Mazda isn't exactly running to get a new rotary engine on the market. In fact, depending on who you ask, the company has no intentions of releasing a successor to the RX-8, ever.

Back in 2016, Mazda CEO Masamichi Kogai told Automotive News the Miata is the largest sports car the brand will build. Ironically, he then commented on bringing the rotary engine back, saying it had to be something that would work for the long term. In other words, it must be fuel efficient and meet future emissions goals.

Return in a New Form

Before you get your hopes up, note that Kogai didn't say a rotary engine would be used in a sports car. Instead, he was careful to state it would be more likely in a Miata, but mated with an electric motor. That means the RX-Vision Concept could be simply a tease.

Nothing officially has come about, but Mazda did file an interesting patent earlier in the year. It's for a stop-start system, which is something plenty of automakers use. Only this one would be used with a rotary engine, showing that Mazda might be finding ways to boost efficiency. The unique design stops the rotor so the intake port remains closed, avoiding flooding the engine with fuel. A spark plug would combust any leftover fuel, just to be on the safe side. It also seals exhaust emissions.

Also, the exhaust manifold switches locations to the top of the engine. That means less heat is lost before reaching the catalytic converter, which could help with emissions.

Mated to the rotary would be an electric motor, along with a lithium-ion battery. The rotary engine could act like the ICE engine on the BMW i3, extending range, or it might be used for propulsion.

There's no guarantee Mazda will bring the rotary engine back. But it's obvious someone inside the company is working on a possibility, at least for now.

Like what you've just read? Check out 8 Upcoming Electric Vehicles You Might Not Know About. Be sure to also Sign up to receive GrabCAD's free weekly Digital Thread newsletter.