Why Can’t Everything Just Be 3D Printed?

Spencer Wright is a designer and writer based in New York City. His work on metal 3D printing has been widely shared throughout the industry, including on the GrabCAD blog. He also writes a weekly manufacturing newsletter called The Prepared and works on research & integrations at nTopology.

He sat down with GrabCAD recently to discuss a topic he feels really needs to be addressed in the 3D printing industry right now. 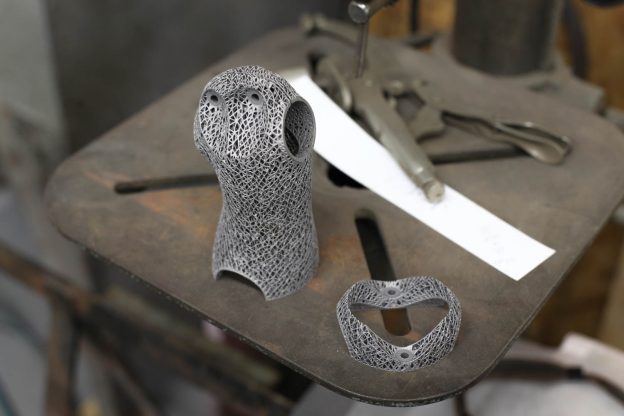 Dave Moran: Spencer, when we discussed this interview, you said you wanted to dispel the myth that “everything” can just be 3D printed nowadays. But, before we delve into that, can you tell us about your background and how you became interested in 3D printing in the first place?

Spencer Wright: My background is in conventional manufacturing and includes a stint as a custom bicycle frame builder. From 2008 to 2011, I was building high-end bicycle frames full time. When you start thinking that you want to build bikes, you start looking first at bicycle specific tools, but the deeper you go the more often you just sort of end up buying general manufacturing tools.

Towards that end, I had two lathes, four milling machines, gas welding and brazing equipment, TIG welding equipment. I ended up with a broad range of mostly manual fabrication equipment, and as I started building more tools for myself I became more and more interested in general manufacturing. I ended up taking a job and selling most of my shop to a company that built high-end windows and doors, and I worked in a small sort of skunkworks division that was making these robotic sliding doors, which kind of opened my eyes to broader areas of manufacturing. I was designing, testing, and sourcing these complex electromechanical assemblies and visiting factories all over the world.

As somebody that had a smaller shop, getting to go to China and see manufacturing on a broader scale and thinking about the way it impacts the market was such a treat. It was a couple of years later that I started hearing more and more about 3D printing. This would have been around 2013.

Dave Moran: So what led your interest from traditional manufacturing to 3D printing?

Spencer Wright: When I was working at that door company, we actually considered getting a 3D printer. We looked at stuff for rapid prototyping. We had a bunch of manual equipment and a small CNC vertical mill, but we were looking for ways to prototype assemblies more quickly. We considered buying an industrial printer, a polymer printer, but at the time the cost structure didn’t really make sense to us. We weren’t going to get full capacity out of it, and we realized if we’re going to do this we should just outsource the prototyping.

Dave Moran: So did you end up going through a print shop or something?

Dave Moran: Interesting. So you were curious about 3D printing, but it wasn’t until later that you really took it seriously?

Spencer Wright: Right. Around 2014, I had moved to NYC and Makerbot was a real force in the hardware scene. Shapeways had just closed a big funding round and they were very public and outspoken and exciting. It was fun to think about.

It was a little bit later that I actually started to use Makerbots for actual tooling. I will say that I don’t use plastic tooling all that often, but in a couple of cases it has been absolutely essential to something else that I’m doing. I’ve used it for tooling assembly. It’s amazing at that, but the more I looked into other applications the less it made sense.

Spencer Wright: The first reason that not everything can be 3D printed is that so much of the 3D printing industry is just so immature right now. By that I mean that it’s changing rapidly and as a result something you are able to print today might not be printable tomorrow, and vice-versa. Technologies are constantly in flux. There’s also wide disparity across the industry about who is even willing to print what.

For instance, I submitted about a half dozen quotes for a single part a few weeks ago. The same part sent to half a dozen print shops, and half of them said, “we will not print this. We don’t think it’s manufacturable.” Meanwhile, I went ahead and got it printed and it printed just fine.

The industry just isn’t exactly sure right now what it’s good at and what it’s not good at, which makes it difficult as a designer to rely on it. You have to be willing to work with job shops and invest a lot of your own time and your own money into printing samples that may or may not work.

I’ve heard it less recently, which I’m very happy about, but there has over the past couple of years been this often used marketing slogan that 3D printing will lead to complete design freedom. People say: “with 3D printing complexity is free.”

The next step, of course, is that 3D printing is not even a meaningful classification of technologies right now, and by that I mean we’re talking about 3D printing, but we haven’t defined what that that actually means yet. It encompasses a wide diversity of different technologies that span pretty much everything from somebody printing a really low-fidelity plastic part that’s good for a tool or a fixture up to somebody printing a really, really complex but really, really small metal part to be used as a medical device or an implant. These are not similar technologies, but they’re all referred to as 3D printing.

The only meaningful thing about the term “3D printing” is that if somebody is referring to a technology by using the words “3D printing” that means that that technology is really immature and probably hasn’t gotten to the top of its lifecycle yet. It’s just not a meaningful classification and as a result even if “everything could be 3D printed,” that wouldn’t mean anything, because it’s expanding the definition of what 3D printing is so far that it doesn’t even make any sense any longer.