Why Clay Continues to be Key in Car Design

With modern, cutting-edge technology, it might be a surprising fact that the automotive industry still relies heavily on clay models for car designs. That might sound brutish, considering the advanced techniques designers have at their disposal. After all, companies like Ford can create vehicle platforms digitally so thoroughly they can run the cars through thousands of virtual crashes on super computers to eliminate inherent safety weak points.

If that's the case, is clay car design still part of the process because of backwards, outdated members of the industry? Some might make that assumption, but it's an oversimplification of reality. After all, even Tesla Motors, which loves to point out any perceived outdated practices in the industry, uses clay models in the design process. 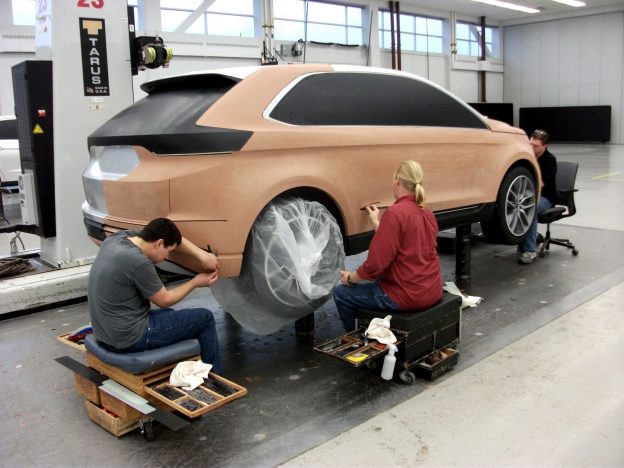 Clay is the tool of choice when it comes to car design.

Another Tool in the Box

Quite honestly, clay isn't superior or inferior to digital design tools like CAD. That would be like arguing the bass guitar is superior to drums in a rock group, or that a hammer is better than a screwdriver. Clay's just another tool in a designer's arsenal.

Many designers say that clay gives them another perspective in the design process. It forces them to look at the big picture, or the entire car, instead of just focusing on a small aspect, which is the tendency they say comes with digital methods. The most dramatic car designs have a flow about them, from the front fascia all the way to the rear. They don't look cobbled together, but instead are a cohesive beast of beauty.

Another element you get with a clay model is that multiple people can be standing around it, looking at different areas of the car at the same time. People can provide instant feedback while designers work. Multiple designers sometimes work on different details. The process is uniquely collaborative.

Because clay models are often to scale, it's the next-best thing to seeing a prototype, plus it costs less. Designers can add to and take away from any area of the car's exterior with little trouble, making it a highly fluid media.

Many auto designers say that clay allows them to spot flaws in digital renderings. You can chalk that up to how things look on a screen, or how they appear at a smaller scale. Whatever the reason, experts agree that skipping the clay model stage can result in unfortunate designs.

As Norio Terauchi, a designer at Mazda says, creating the exterior of a car "is a sensuous beauty that is difficult to reproduce through digital technology." After all, to get people to open their wallets, you must speak to the heart as well as the mind.

Harley Earl is generally credited with pushing clay as a design medium for cars. He worked for General Motors from the late 1920 to the late 1950s, literally transforming the shape of the automobile during his career.

Earl had a vision of mainstream cars becoming a sort of fashion statement. Most viewed them as utilitarian objects, like a hammer. What Earl saw was a means of getting around that also embodied artistic expression.

If you look at early automobiles, the luxury models were already quite ornate and stylish. But mass-produced vehicles, like the Ford Model T, were quite plain. Earl realized that the best way to concentrate on making the exterior of any vehicle look better was by designing it in clay.

Among Earl's credentials are numerous iconic cars designed under his watch, including the Chevrolet Corvette and Chevrolet Impala. Based on Earl's success, other automakers started playing around with clay, resulting in dramatic designs across the industry.

Today, automakers pour considerable resources into clay modeling. For example, Ford said the new Raptor design required almost 2,000 pounds of clay and about 20,000 hours of work. Big automakers go through quite a bit of clay each year. Ford says it uses almost 200,000 pounds each year. To help recover costs, the company built a custom machine that will recycle about a tenth of that.

Clay Isn't What You Think

Even though we call it clay, the stuff automotive designers create models out of contains zero actual clay. Ask an automaker what's in the "clay" designers use, and you'll usually get some vague response about wax, oils, and "fillers." Many automakers have their own proprietary clay.

The clay comes in cylinder tubes that are about 3 inches in diameter and 6 inches long. When designers need a new lump, that cylinder is warmed, making it pliable.

You should also know that designers don't start off slapping together enough lumps of clay to make a mass larger than the vehicle, then remove layers to create whatever they're looking to achieve. Engineers provide plans for the vehicle structure, and a scale model is constructed out of aluminum framework. It even has wheels and tires, so they can see how everything fits. Over that framework, designers place cut sections of foam, forming the rough outline of the car. They then apply the clay over the top, allowing them to hone the finer details.

Once the design's been finalized, the entire clay model is scanned. Then the model sits in cold storage, until the design process is complete and the model is no longer needed.