It’s difficult to look at the Bugatti Chiron and not get caught up in this hyper car’s striking exterior design. The approximate $2.5 million price tag can also leave you in awe. Then there’s the earth-shattering 8.0-liter W-16 quad-turbo engine and the 1,479 bhp it produces, plus the 261-mph top speed. That’s incredible, especially considering the vehicle weighs about 4,400 pounds.

All that is certainly mesmerizing, but there’s so much more to this vehicle. In fact, what you might not see and probably haven’t read about makes this Bugatti a modern engineering marvel. 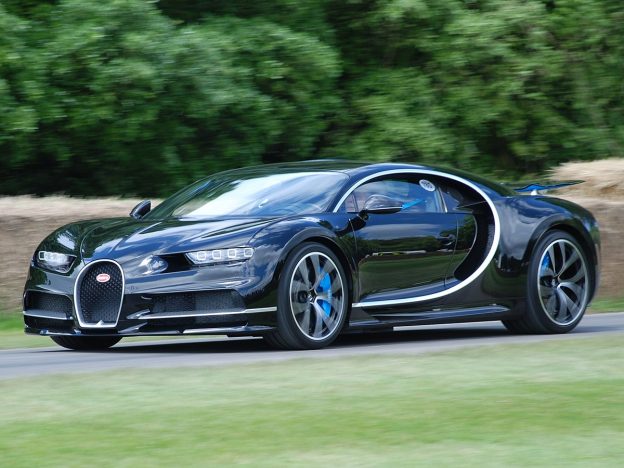 The Bugatti Chiron is a marvel of engineering.

Every step of the production process is done by hand. That’s unique in today’s world, and it’s a huge task. Just consider that the Chiron contains over 1,800 bolted joints. One person properly torques each of those nuts, using an advanced electronic torque wrench for controlled precision.

To join the monocoque and rear portion of the Chiron, Bugatti uses 14 titanium bolts. The material is of course incredibly strong and lightweight. In fact, each bolt weighs a mere 34 grams.

Speaking of the monocoque, it’s made entirely of carbon fiber. It boasts a torsional rigidity of 50,000 Nm per degree of twist, plus a flexural rigidity of around 0.25 mm of deflection per ton. According to Bugatti, that’s similar to the specs for an LMP1 racer. Production for this portion of the vehicle takes four weeks.

That amazing 8.0-liter power plant that powers the Chiron actually comes from a Volkswagen engine factory in Salzgitter. Each engine does go through a special set of tests for eight hours solid on a bench before it’s approved and sent on to Molsheim for final preparations before it’s installed in the hyper car.

Each engine weighs quite a bit, which you should expect with an 8.0-liter displacement. Tipping the scale at 1,384 pounds, the power plant almost outweighs some roadsters.

To keep that engine and four turbos running at an optimal temperature, Bugatti has designed quite the cooling system. Three water pumps keep the coolant flowing through massive pipes, which handle more pressure than a fire hose. All in all, the system pumps the equivalent of 200 gallons of coolant per minute through the main radiator. Also in the cooling system are three engine oil coolers, a transmission oil cooler, a hydraulic oil cooler, and a rear differential cooler. If you weren’t counting, that’s 10 radiators. The intercooler has a 12-liter low temperature cooling loop.

You might not realize it, but the Chiron’s engine is similar in size to the one in the Veyron. To boost horsepower by 25 percent, engineers had to do some revisions. New turbochargers and intercoolers cram more air into the cylinders, which means greater oxygen density. Those turbos are on a two-stage system, versus a parallel system used for the Veyron. Without getting too technical, at higher RPMs, air flows through both turbos on each cylinder bank, increasing pressure for improved density. Over 60,000 liters or 15,850 gallons of air flows through the engine in a minute.

Upgraded Duplex fuel injectors add more gas to the air-fuel mixture. The result is a bigger, better burn. This setup results in a flat torque curve, which is super unique. The car has on tap 1,180 lb.-ft. of torque from 2,000 to 6,000 RPM.

Connected to the W-16 engine is a titanium exhaust system. It contains four pre-converters and two catalytic converters that are six times larger than what you find in a typical mid-size sedan. Inside those catalytic converters are 230,266 square meters of catalyst, which is enough to cover 30 soccer fields.

To top it all off, each body part of the Chiron is painted by hand. Of course, Bugatti uses a high-quality painting process, with the top coat alone constituting up to eight layers. That means workers must sand down and polish each coat before applying the next one, which makes for tremendous effort by hand.

One of the most amazing things about the Bugatti Chiron involves the dyno testing toward the end of production. The hyper car runs on a rolling dyno for three hours straight. Bugatti had to design new electrical cables for the dyno, because the Chiron’s output far outstrips the Veyron’s.

During the dyno run, the Chiron creates up to 1,200 amps of electricity. The excess is stored in a battery, which is connected to the Molsheim electrical grid, giving back to the city’s residents.

The Bugatti Chiron will have a lasting impact not only on vehicle design, but also engineering and even production. This is a truly revolutionary hyper car.

Where 3D printing fits in the automotive sector.