Smart Roads: Highways of the Future

From driverless cars to commercial space travel, technological innovations in the transportation world are moving fast and the Fourth Industrial Revolution is hitting the road too – welcome to the concept of Smart Roads.

Road and traffic system advances implemented through “smart roads” are starting to play an increasingly important role in such modernization, and for good reason. The US road network alone exceeds 6.58 million km, or 17,947 square miles of land. By 2035, there’s expected to be 2 billion cars on the road worldwide – double the estimated 2010 figure.

With so many roads on the planet and increasingly more vehicles, coming up with new and cutting-edge road systems seems both ingenious and essential. 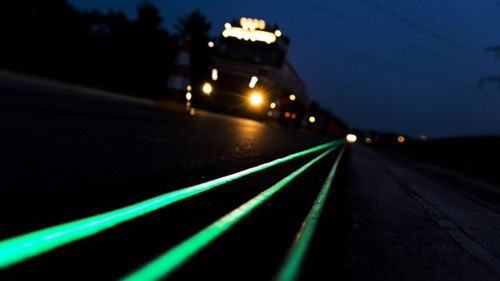 “Smart” products or concepts are becoming more familiar to us all. Smart phones, smart watches, smart cars, smart cities and the Internet of Things – the list goes on. So why not smart roads that can think and predict the needs of the people and vehicles that travel on them? What if our roads were environmentally conscious, could charge our cars as we drive, help increase our safety, automatically summon help when accidents occur and potentially decrease traffic? From solar powered highways and police drones to glow in the dark roads, our car journeys could be undergoing drastic changes in the future.

Currently, roads have a fairly simple purpose – to get us from point A to point B in a relatively safe, easy, and efficient manner. They connect us with other cities, towns and people, and enable us to experience more of the world. Historically, technology hasn’t been intricately applied to roads. Commonly made from asphalt or concrete and painted with various signage, roads have a pretty basic makeup – but that’s about to change.

Essentially, a smart road would be more active and animated than its inactive and inanimate predecessor. It could have sensors, data recording capabilities, the ability to respond to changes in environment and it would be in conversation with other cars and their drivers, traffic lights, emergency services and smart cities at large.

How will we benefit? To put it simply, our journeys could become quicker, safer, and more efficient.

Smart road innovation is very much upon us, and it’s just the beginning of this new era.

Let’s explore some of the developments:

US start-up The Solar Roadways Project is on a mission to replace standard roads with panels fitted with photovoltaic cells to generate and store electricity. The panels possess snow-melting heating devices and inductive charging capability for electric vehicles when driving. Following an Indiegogo crowdfunding project, the campaign exceeded its original target of $1 million by raising $2.2 million to progress onto the next stage of development.

Trials are being undertaken at three UK universities (Bath, Cardiff and Cambridge) to create self-healing concrete technologies that enable roads to autonomously repair themselves without the need for human intervention – thus reducing maintenance costs. The concrete uses bacteria to seal cracks once damage or decay is detected.

Then there’s innovation by companies such as AECOM regarding charging electric vehicles on the go instead of drivers having to make the inconvenient pit stop to charge up before a long journey. The introduction of an “Electric Priority Lane” would use embedded magnetic fields for EV users to charge their car on the go. Engineers at Lancaster University are also exploring a system whereby vibrations from vehicle traffic are converted into electricity so that one to two megawatts could be recovered per km, enough to power between 2,000 and 4,000 street lamps.

A five-year test is currently taking place on a half-mile stretch of road in Colorado during which time the existing road surface will be covered with factory-made concrete slabs featuring wi-fi connectivity and embedded fiberoptic cables that act as pressure sensors.

A 2km electrified road just outside of Stockholm in Sweden opened earlier this year. The road transfers energy from two tracks of rail in the road, recharging electric car and truck batteries as they move. Taking it a step further, China is building a “smart”  stretch of highway in the eastern city of Jinan, a city of nearly seven million people. The road will have it all – solar cells that can generate enough electricity to power highway lights and 800 homes, embedded sensors that can communicate with connected vehicles to provide traffic updates and electric charging capabilities.

Road police drones are coming into play too. Cornwall and Devon police force – who cover the largest geographical zone of any force in England – announced the recruitment of a “drone manager” to lead a dedicated unit fighting crime with airborne devices. While privacy and police cuts are a concerning by-product, using drones could help combat crime and improve road safety, offering a cheaper alternative to helicopters.

When smart roads detect where vehicles are, and how fast they’re going, they could potentially slow down a car, know whether it’s crashed or theoretically call first responders to the site of an accident. The technology would collect real-time data on road conditions and congestion data too, encouraging the route that is the most efficient and safe.

As amazing as this all sounds, the technology has its sceptics.

Charles Schwartz, a professor of civil and environmental engineering at the University of Maryland, said: "If the cable breaks inside one of these panels…what happens?”

Then there's the matter of cost. Integrated Roadways estimates that smart roads will cost approximately $4 million per lane per 1.6km, or about twice as much as conventional roads, something that may prove to be a stumbling block.

With such high costs the technology will need to prove it can make a real difference to warrant such investment.

Final Thoughts: A Long Road Ahead

The potential of connected smart roads is huge. Not only could they make driving safer, they could transmit real time data and share information, making it simpler and quicker to get around, find parking, commute effectively and communicate with each other.

There is much to be optimistic about when it comes to smart roads, but there is still a long way to go and the ride is just getting started.

Smart roads sound pretty cool, but what about roads that can actually play music: Japan's Strange Musical Roads are Actually a Speed Deterrent