When traveling down certain stretches of road in Japan, you don’t need the radio, streaming audio, or anything else. The roads themselves provide music as you drive over the surface. That makes complete sense, coming from a nation where toilets sing and you can get socks made of sushi.

While these roads certainly seem weird, they also serve a purpose aside from entertaining drivers. 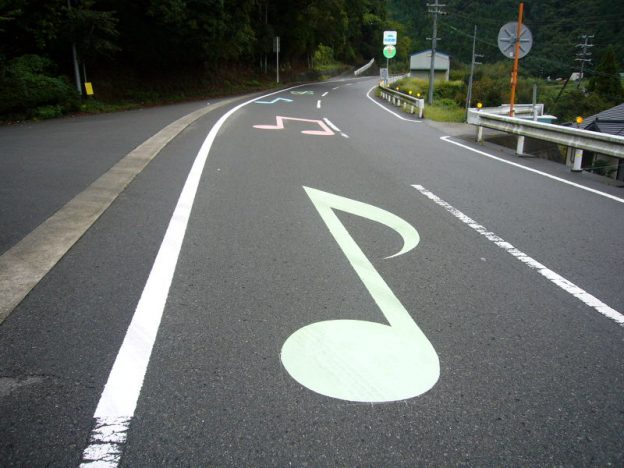 Hokkaido Industrial Research Institute first dreamed up, designed, then created musical roads. How they work is brilliantly simple. Plenty of roadways have rumble strips which are supposed to warn you if your car is starting to drift onto the shoulder. Those strips are grooves cut into the road surface, and that’s exactly how the musical roads work.

To get the right tune, crews must cut the grooves at precise intervals. Through experimentation and simple math, researchers were able to crack the code for reproducing any musical piece. Musical notes are just vibrations in the air. If anything vibrates 330 times per second, the result is an E note. At 45 mph, the notches need to be spaced out about 2.4 inches. The possibilities are pretty much unlimited.

According to legend, a roadworker accidentally caused damage to a new road while operating a bulldozer. He then realized the notches produced musical notes when a car drove over them rapidly. If that’s true, it was engineers at Hokkaido Industrial Research Institute who refined the practice, resulting in what Japan has today.

For the grooves cut in a road to produce the correct tune, a car must be driving at the posted speed limit. It’s a creative way to discourage drivers from speeding, keeping everyone safer.

Supposedly, the ideal speed to make musical roads work is just 28 mph. Drive faster and it sounds like a sped-up version of the music. Going slower produces a sickly soundtrack some say induces car sickness.

In Japan, signs tell drivers to be prepared for the musical break in the road. Colored notes painted on the road right before the first notches also act as a warning. The notched sections only last about 30 seconds of travel time.

In a move that’s no doubt shortsighted, one stretch of road plays a section of a famous pop song. No doubt that song will fade into obscurity, and then what? Roads need maintenance, so perhaps that’s when authorities choose the next flash-in-the-pan musical hit.

Not every vehicle works well with this concept. If you’ve driving in a convertible, you likely won’t hear much of anything. The same thing goes for driving with the windows down. Luxury vehicles with plenty of cabin insulation will cancel out the sounds. Advanced damping technology like GM’s Magnetic Ride Control will also render these fun sections useless.

Not Just a Japanese Thing

While the vast majority of melodious roads are located in Japan, a few others exist outside of the island nation. Several are located in South Korea, including one that plays Mary Had a Little Lamb.

Back in 1995, two Danish artists had an idea of their own. By placing raised markers in a road’s pavement, drivers can hear a tune. These look like little dots in the road, similar to Botts’ dots, instead of notches. There’s a strip of dots for each tire, allowing for more musical creativity since the dots on either side can be spaced differently.

In the Netherlands, the local government decided to replace rumble strips outside of a village with musical strips. Officials chose the regional anthem, and if you see video of cars driving over it, the melody is quite clear. The problem with this innovation is that people who lived in the area hated it, so they begged the government to get rid of the musical strip, which it did.

We have two musical roads in the United States. The first is located on a strip of historic Route 66, situated east of Albuquerque, New Mexico on the way to the mountain town Tijeras. If drivers go 45 mph they’re treated to America the Beautiful, something that seems fitting for such an iconic road.

Honda decided to grace the state of California with the second musical road in the United States. Located in Lancaster, this section of pavement has actually become quite notorious. Honda engineers were supposed to make the road play the William Tell Overture, or what some people know as The Lone Ranger theme song. The result was something else, thanks to a miscommunication between the Japanese and Americans working on construction. The instructions said the grooves needed to be at certain intervals. This was interpreted as the distance between the grooves, not taking the span of the grooves into account in that distance. As a result, the grooves were cut too far apart from each other, so you don’t hear the correct melody.

It gets worse. Lancaster residents complained about the noise. City officials had that section of the road repaved, but people still wanted to hear the musical road, perhaps hoping it would be done correctly after one failed attempt. Officials approved having the grooves cut into a section of road away from any houses, and once again the work was performed incorrectly.

As the popularity of musical roadways are increasing, and governments are looking for creative ways to promote safety, don’t be surprised if one is built near where you live.

Musical roads are just the tip of the iceberg as far as some of the interesting topics being discussed in the Automotive Industry Trends group on GrabCAD Groups.