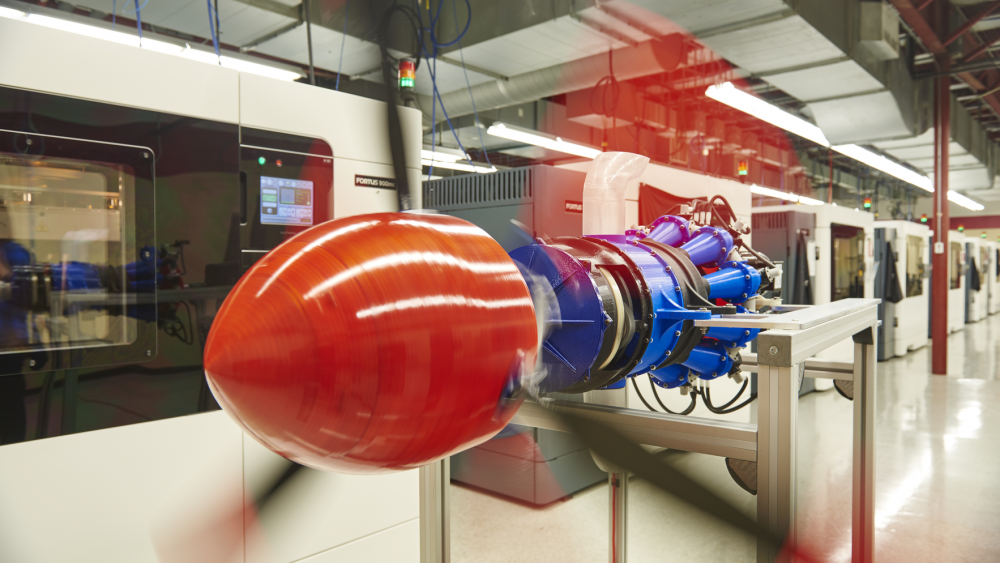 3D Prints that Float in Space and Sea

When we think 3D printing, we tend to think small. Parts, shapes, and forms - generally smaller than a breadbox seem to be the norm. But it's not always so.

3D printers are coming into their identity as they make their way up the adoption curve of technology. As they do, they are more versatile than ever before, printing with many different types of inks and stock. They're also printing, in some instance, to very large scale. They are being used to print large scale forms and products which will operate in environments outside of a research laboratory, university, or an enclosed room down the hallway. In some cases, they float!

3D Printed at Scale - to Float

That is the case for the University of Maine, whose Advanced Structures and Composites Center has introduced the world’s largest 3D-printed logistics vessel for U.S. Department of Defense.

One of the two vessels (the largest ever 3D-printed) is used to analyze ship-to-shore movement of 20-foot containers which would carry expeditionary equipment and supplies. The other vessel can transport a Marine rifle-squad and their equipment and supplies. The prototypes can be uniquely connected for a vessel that can be one long logistical pipeline to make the ship-to-shore connection with logistics support.

The development, via simulation, helps the Marines find new solutions to launch the necessary logistical goods in remote and not so easily accessible locations. This isn't the first such creation for the University of Maine. They've built a reputation and a track record for using 3D printers to create floating assets.

In an article on their website, U.S. Senators Susan Collins and Angus King chimed into hail the effort:

“In 2019, UMaine unveiled the world’s largest 3D-printed object — a 25-foot patrol boat. Today, we celebrated the creation of 3D-printed vessels that will be more than twice as large and represent the next remarkable leap in innovation by UMaine,” said Senators Susan Collins and Angus King and Representative Jared Golden in a statement. “This accomplishment is a prime example of how UMaine is leading the nation in large-scale additive manufacturing technology. These new boats continue the Composite Center’s contributions to our national defense and will help fuel new breakthroughs in advanced manufacturing that will create good jobs here in Maine.”

From the Sea to Outer Space

The oceans aren't the only places that 3D printed forms or printers are working within nowadays. They are also used in outer space.

For NASA, the future of space has much to do with self-sufficiency while in space. After all, there's not earth supply chain to readily turn to for many things. With a complex and capable 3D printer in space, many things can be created on demand, as the need arrives. Researchers at Cornell within their College of Engineering enabled 3D printing by introducing the use of modeling software which was successfully tested  aboard the international space station as part of a collaboration between Cornell, Hewlett Packard Enterprise (HPE), NASA and the ISS U.S. National Laboratory.

Specifically, it was an effort to demonstrate the functionality of the HPE Spaceborne Computer-2. The software and its simulation capability is part of the first commercial, state-of-the-art edge computing system with artificial intelligence capabilities. It enables real-time processing of massive amounts of data in space, without the delay from transmission back and forth to earth.

When it comes to large scale printing, one area sure to benefit, now and into the future, is architecture and construction. With large-scale printing capabilities, 3D printing is at forefront of innovation to create structures newer, faster, cheaper, and with innovative materials for different purposes.

In Austin, Texas, a three-bedroom, 2 ½-bath house designed by a San Antonio-based architecture firm was built using a large-scale 3D concrete printing system. It was first built as a demonstration project to prove the concept of building quality homes that also met audacious sustainability and energy-efficient objectives.

The house includes fabrication of unique contours made from a proprietary material called Lavacrete, with similar properties of cement. The material is extruded by the printing machine as if it is thick layers of toothpaste emptying into a coiled geometry to create a most unique geometry and architectural creation.

These are just a few examples of how 3D printing is expanding in scale and intricacy to produce forms never associated with printing in any form. As software develops, materials are continously developed, and unique applications are used, 3D printing is on the precipice of being a whole new persona for solving problems that weren’t easily resolved before. Such printing is expanding technology in space, on the oceans, and down your street at the new home that just was built – all at scale that was unimagined in our past without 3D printing. The best is yet to come.