I’ve been building rockets all my life – starting with finding dynamite in my grandmother’s barn as a kid (don’t try that at home!). Now I have the pleasure of working with the country’s most experienced launch team at United Launch Alliance. 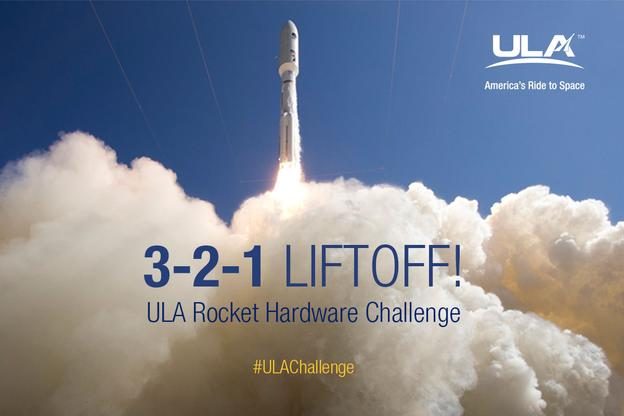 Additive manufacturing (AM) is a critical technology for that transformation, and ULA has teamed up with GrabCAD on 3-2-1 Liftoff! ULA Rocket Hardware Challenge – a chance to design a launch support attachment bracket for ULA’s reliable and proven Atlas V rocket. The challenge is open until October 23, and I look forward to serving as a judge for the GrabCAD Community’s designs. The design will subsequently be evaluated for application on ULA’s next-generation Vulcan Centaur rocket, which is planned to launch in 2019.

The support bracket is used during ground processing at numerous locations at the base of the Atlas V payload fairing. It serves as a support point for work platforms on the days leading up to launch and remains with the upper stage of the rocket during flight.

AM is ideal for complex parts created in small quantities, which describes a great deal of rocket hardware. In an industry where lead times are often measured in years, AM-enabled rapid prototyping can cut months from development cycle. In some cases, we’re testing prototypes just a few days after completing design.

ULA purchased our first 3D printer in 2012 – initially using it for prototyping, building fit-check gauges, and tooling. We’ve used AM to improve our manufacturing and testing processes – offering our technicians better, lighter tools to do their jobs more efficiently and effectively and using their feedback to refine them further. In many cases, we have reduced processing times by more than 50 percent.

In 2014 we turned our focus to flight hardware, and today we are leaders in fused deposition modeling (FDM) polymer applications as well as metal powder-bed fusion applications. We’re not limiting AM to a single team of experts – we’re working across the company to use 3-D printing to optimize for weight, enhance our production processes and substantially reduce the cycle time it takes to build and launch our rockets.

For instance, we’re developing an environmental control system duct system for our Atlas 5 that has 85 percent fewer parts than the traditionally manufactured version and reduced cost and production time by more than 50 percent. The first flight of this system is planned for 2017.

AM is shaping the future of aerospace

Many technologies we now regard as everyday conveniences were “born” as part of the space industry. WD-40, for instance, was developed to displace water and protect Atlas from rust and corrosion. GPS technology supports infrastructure including the financial system and power grid in addition to navigation.

Additive manufacturing offers the opportunity to increase access to space but also revolutionize manufacturing capabilities in space. In 2014, astronauts on the International Space Station printed a ratchet wrench on the station’s 3D printer. In September, ULA announced winners of its university CubeSat competition, and University of Texas El Paso’s winning submission includes a test of on-orbit additive manufacturing.

In 30 years, we think there could be 1,000 people living and working in cislunar space – the space between Earth and the moon.

From printing aerospace tools and parts to improving living quarters for those living on orbit to applications we haven’t even dreamed of, additive manufacturing will be critical to supporting humans’ future in space.

This is an incredible time to be a part of the space industry. At ULA, we are proud to stand on a foundation of more than 100 years of combined launch experience from our heritage Atlas and Delta rockets even as we transform our company – and industry – to make space more affordable, accessible, and commercialized. Additive manufacturing is one of the innovative technologies we’re using to reach those goals, and we look forward to the GrabCAD community’s designs.

Tory Bruno is president and CEO of United Launch Alliance (ULA), serving as the principal strategic leader of the organization and overseeing all business management and operations. ULA has successfully delivered more than 110 satellites to orbit that provide critical capabilities to save lives, explore the universe and connect the world.