Engineer Notes: Cancer Sniffing Dogs, the Boring Project, and Would You Fly in an Autonomous Plane?

In this week's edition of Engineer Notes, we look at how dogs are helping cancer detection, how traffic will be decreased in Los Angeles with the help of tunneling, and so much more.

Would you feel comfortable flying in a plane that was being controlled by, well, no one? Despite the fact that most people would answer “no” to this question, Boeing, the world’s largest aircraft manufacturer, is starting to test autonomous flying technology that would eliminate the need for pilots and make self-flying planes a possibility. According to Mike Sinnett, Boeing’s VP, over the next 20 years, more than 40,000 commercial airplanes will be built, which means the number of pilots will need to increase by 617,000. There is already a worldwide shortage of pilots, so how will the above numbers be possible? The answer: autonomous planes. The artificial intelligence that is being tested is capable of making the same decisions that pilots make and can execute long-haul flights without any assistance from humans. In fact, the U.S military just announced the successful simulated flight and landing of a Boeing 737 by an AI co-pilot. Since this may not be a popular change in the minds of passengers, they will likely start with cargo flights and if they see success there, slowly move onto implementing this technology in commercial aircrafts.

With both depression and suicide on the rise in the 21st century, scientists around the world are trying harder than ever to find a cure for depression that would in turn reduce suicide rates. In South Korea, the country with the fourth-highest suicide rate globally, researchers have been vigorously working to come up with a solution that would dramatically decrease their average rates of suicides per day, which is currently 38 people. Ybrain, a startup based in the Seoul Capital Area, may have just created that solution. This company specializes in “health care wearables” and with their new Mindd device, they believe that they can treat patients who suffer from major depression. This headband device works by using transcranial direct current stimulation to send electric currents to the frontal lobe. Decreased activity in the frontal lobe is strongly associated with depression so with the technology that the Mindd headband uses, Ybrain is optimistic that it will help patients with depression. The Mindd device has been used in dozens of hospitals in South Korea and is now being used in a 500-person study at the Harvard Medical School. After the study is concluded, Ybrain hopes to deploy their product globally.

An AI That Replicates You

A new meaning is coming to the phrase “talking to yourself” thanks to the AI, Replika. Replika was created by a San Francisco-based startup called Luka with the goal of creating a device that could “serve as a companion for the lonely, [be] a memorial of the dead,... or even a version of [oneself] that can carry out all the mundane tasks that we humans have to do, but never want to.” By using the answers to questions that users spend tens of hours answering, Replika works on a neural network to build a digital library about the user. From this library, the bot can mimic and replicate the way that the user would talk and even pick up on the users eccentricities and idiosyncrasies. As of now, Replika has been used for people to see how they sound to others but Replika has great implications for people who are lonely or looking to talk to someone that is just like them. With the creation of Replika, the question arises as to what exactly makes us us? If there is a device that can produce organic thoughts based on your previous thoughts, is that considered a different version of yourself?

The Boring Company is quite an apt and ironic name for Elon Musk’s latest project. The goal of the Boring Company, which is to bore the undergrounds of Los Angeles, is anything but boring. Musk, who is best known for being the CEO of Tesla and SpaceX, is paving new grounds with his dream of creating an underground network of as many as 30 tunnels that would transport bikes, pedestrians and most importantly, cars. Cars would be rocketed on electric sleds that will be able to reach speeds of 125 mile per hour. This is fast enough to get people from Westwood to LAX in five minutes - currently an hour drive. The main goal of this project is to eliminate the copious amounts of traffic in LA but it will also be used for the metro rail and other city transit. Even though underground tunneling can cost up to 1 billion dollars per mile and permits for underground building are incredibly difficult to get, the first machine has already started to bore. Musk said that this machine is “14 times slower than the company’s pet snail, Gary.” Regardless of the slow movement, this project will result in speedy travels. 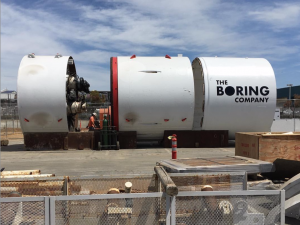 Man’s best friend just got better (if that’s even possible). Researchers in Japan have started to use dogs to sniff out patients for the potential of stomach cancer. Scientists at the Nippon Medical School, which is located outside of Tokyo, have trained detection dogs to be able to smell a particular odor that cancer cells emit, a smell that humans cannot detect. In their research thus far, these dogs were able to find signs of cancer with nearly 100 percent accuracy. Although this seems like a promising technique, there are a few problems that come with this method of cancer detection. The first is that it costs nearly $45,000 to train each dog. Secondly, many outside influences can throw a dog off and there is no way to tell when they are having a so-called “bad day.” Even with high costs and possible inconsistencies, dogs have been used to help in medical cases for years such as for patients with diabetes and epilepsy. This gives scientists hope that within the next few years, dogs will be able to help detect cancer with just as much reliability as they do detecting low blood sugar levels or seizure signs.

There has been a great deal of talk about self-driving cars and what implications they will have for humans. One of the trickier parts about letting these cars roam our roadways is the problem of morality. Humans are quite complex in the sense that they are able to make moral and ethical snap decisions based on context, pros/cons, and other factors that can be worked through in a matter of seconds. If you are driving at an appropriate speed but do not have time to stop as a racoon is crossing through your lane, do you swerve and hit the car in the other lane or do you hit the racoon? The ability to choose to harm the racoon over the other driver was thought to be an ability too complicated to accurately model until now. Researchers from the University of Osnabruch in Germany believe that there is a “value-of-life” model that can be represented in an algorithm that autonomous cars may be able to follow. Although this is just the tip of the iceberg when it comes to the discussion of the morality and the ethics that come with self-driving cars, it is reassuring that this is a topic that is being discussed.

There is no shortage of uses for 3D printers especially printers manufactured by Stratasys, a global leader in 3D printing and additive solutions. Their most recent contribution to the world of 3D printing is stretching beyond this world (literally). Using Stratasys’ Fortus 900mc printer, the German Aerospace Center is creating a robot that will explore the surface of Mars within the next five years. The prototype of this robot, named the TransRoPorter, needed to be built in the fastest and least expensive fashion. For this reason, the German Aerospace Center turned to the Stratasys printer for help. The prototype, which consists of a moveable TRP Rover-Unit and a Payload Module, was tested in conditions that mimicked the extreme conditions that it will face on Mars. It was important that the prototype was built with material to withstand all sorts of tests, and thankfully Stratasys’s ASA material was the perfect material for just that. This project just adds to the long list of all the ways 3D printers are helping create solutions for projects that are out of this world. 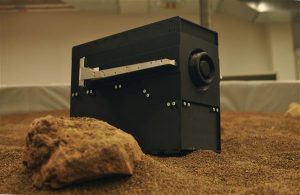