You, like everyone else, have likely heard all about how electrification is the future of automobiles. Fully-electric cars don't emit any emissions (at least, not directly), delivery peak torque from a standstill, reduce noise pollution in cities, and cost less to operate year after year.

It all sounds great, but there's one huge problem: minerals. More specifically, available cobalt and nickel supplies may not be enough to sustain mainstream adoption of electric vehicles. 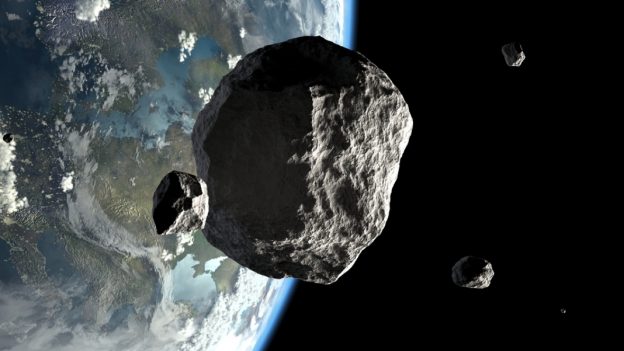 Mining asteroids for the cobalt and nickel needed to produce electric vehicles? It's not as far-fetched as it sounds.

More specifically, there's quite a bit of nickel hidden in the earth. The problem is that about half of it isn't the kind of grade necessary for battery production. Whatever ores are of the necessary grade have been claimed by large and small mining outfits around the globe, and they're playing the scarcity game. In other words, the cost of nickel for electric car batteries is starting to climb, and probably will only continue to do so.

The situation around cobalt isn't much better. Mining companies are searching for new sources at an increased rate, thanks to about half of the world's known supply residing in the Democratic Republic of Congo. Without getting into details, the political and social environment there isn't exactly stable, putting a pinch on cobalt for everyone.

If we're putting a strain on nickel and cobalt supplies with electric vehicles making up a tiny sliver of the market right now, the situation will only worsen in the coming years.

There is a solution, which sounds like something out of a sci-fi novel: mining asteroids. Forget that horrible movie Deep Impact, though, because it (hopefully) will be nothing like that.

Don't take my word for it. Instead, read the recent study produced by Noah Poponak from Goldman Sachs. It focuses on mining platinum, but the principles are the same, and it's from a legitimate source. Not so crazy after all, is it?

Stephen Hawking and other scientists have postulated that for humanity to flourish in the future, we'll have to get out of our comfort zone. Namely, that means traveling beyond Earth. At least to get the nickel and cobalt we so desperately need to cut down on vehicle emissions, which could involve taking a ride on asteroids while drilling into their core.

This idea of extracting minerals out of asteroids has been tossed around for decades. One of the most compelling reasons for doing it isn't to say you're an asteroid miner (even though that's a huge plus). It's that asteroids contain minerals that are considered scarce here on Earth, including cobalt and high-grade nickel.

It's going to take considerable financial resources, plus clever engineering to pull something like this off. Before you say that alone makes asteroid mining impractical, consider this: 241 Germania, an asteroid astronomers have been tracking since 1884, contains enough minerals to equal one year of GDP for the entire planet. Let that roll around in your head for a moment.

While 241 Germania and other asteroids are a little far to try out first, scientists have singled out twelve smaller asteroids near the L1 or L2 Lagrangian Points, which we could reach and mine using technology available right now. These asteroids sit in a stable gravity field, removing the risk associated with landing on and extracting minerals from other asteroids. With those early successes, going for the big fish won't seem so far-fetched.

Just how much will asteroid mining cost? That report from Noah Poponak cites analyses from Caltech, which pegs the price of an asteroid-snagging spaceship at about $2.6 billion. Probes used to mine the minerals could run in the tens of millions. Keep in mind that pioneering efforts by SpaceX, Virgin Galactic, and others could lower the cost further. Compare that to MIT's estimate that establishing a new rare metal mine on Earth might cost as much as $1 billion. Keep in mind, that terrestrial mine might generate a fraction of precious minerals you can extract from an asteroid.

Goldman Sachs is confident that the lowering cost of space exploration and travel will make asteroid mining not only feasible, but practical. Demand for electric cars could make such business ventures lucrative and necessary. As they say, necessity is the mother of innovation.

Interested in aerospace engineering? See how 3D printing is cutting costs and speeding up production of the Atlas V rocket.