3D printers aren’t just for applications here on earth. NASA is aggressively using 3D printing to fabricate parts used on their spacecraft.  They also sent a 3D printer into space and remotely fabricate parts from waste plastics. While we are familiar with 3D printing for manufacturing in industries such as automotive, medical, and defense, aerospace and deep space missions are finding more uses for 3D printed parts. 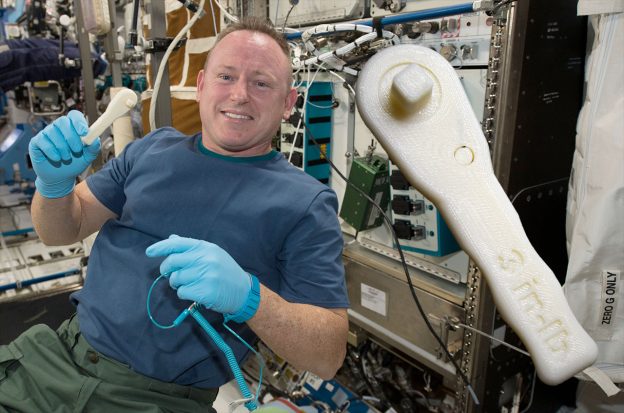 The Orion spacecraft is part of NASA's follow-up program to the now-retired space shuttles and it will enable astronauts to travel beyond the International Space Station. To help with this mission, the Orion capsule recently had more than 100 parts installed that were 3D printed. This was made possible by a collaborative effort that included defense contractor Lockheed Martin and several others. Using this approach that incorporated complex technologies, the team was able to develop parts and new materials that can withstand the extreme temperatures and chemical exposures found during deep space missions.

In addition to Orion’s 3D printed parts, parts are being printed at the International Space Station.  This 3D printer is called the Refabricator, a hybrid 3D printer that can recycle hard polymer plastic numerous times and make new items. It's about the size of a small refrigerator and is remotely controlled by operators on Earth who monitor its production via video cameras.

The idea of having a 3D printer within a space station helps fulfill a prophecy of self-sufficiency; it reutilizes discarded plastic waste—mostly from packaging—and turns it back into useful parts, components, and other items that the station can use. The otherwise discarded or wasted plastic may be turned into objects like plastic syringes, eating utensils, or a custom-made wrench. It reduces the need for resupply missions. What’s more, it's a boon to space station logistics, limiting the backup materials required for long-range expeditions at the space station.

"When we begin launching humans to destinations beyond low-Earth orbit, space will be at a premium," said Niki Werkheiser, manager of In-Space Manufacturing at NASA's Marshall Space Flight Center in Huntsville, Alabama; this is where the device will be thoroughly tested before launching it to the space station. "It simply won’t be feasible to send along replacement parts or tools for everything on the spacecraft and resupplying from Earth is cost- and time-prohibitive. The Refabricator will be key in demonstrating a sustainable logistics model to fabricate, recycle, and reuse parts and waste materials.”

One Small Step to Self-Sufficiency

It is all still experimental and will take some time to make the items remotely, bring them back to Earth, and test them to ensure that they are sufficient to be used in space. The bigger message is that the Refabricator enables better use of limited resources in an environment that has virtually no resources.

The space program has always set the precedent of proving new technology and transferring it to other uses; 3D printing should be no exception. Success with a refabricating 3D printer in space only helps the case for all on Earth to do the very same with our discarded plastic.

As one of the NASA scientists points out, it helps create the vision of consumers going to their local Refabricator site, feeding it with discarded plastic such as water bottles or plastic bags, and then receiving a brand-new phone case as a result.

NASA's efforts take 3D printing beyond what was thought possible only a few years back. If a 3D printer can successfully be used in space, it could probably be used anywhere. "The space station is the ideal proving ground for this important technology," said Werkheiser. "Astronauts are already living and working in space, a mere 250 miles above Earth. Those crew members are helping make discoveries to benefit humans around the world while testing the important technology, life support systems, and medical breakthroughs that will enable long-duration space exploration by humans."

So, if 3D printed parts can be made on Earth and then used in assemblies and equipment that goes out to space beyond our world, it only accelerates the use of 3D printing as a disruptive technology for so many facets of our world. For instance, 3D printing is already helping to push the Green Industrial Revolution.