To Manage, or Not to Manage, From the Perspective of a NASA Engineer

When my first engineering internship turned into a full-time job after graduation, my supervisor called me in for a chat. He wanted to talk about possible opportunities in the company, and give me some advice based on his experiences. When he asked me where I saw myself in five to six years, I told him I expected to be in management. I didn’t have the gall to say it to his face, but basically I figured I wanted his job. 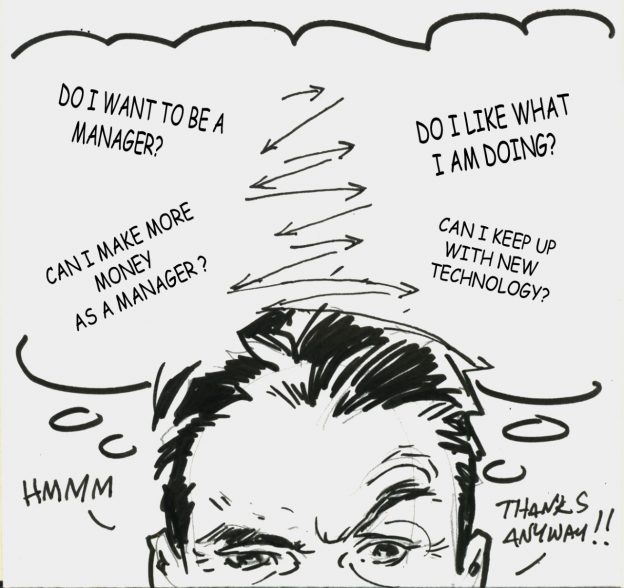 Being a manager can sometimes get frustrating, and involves a lot of paperwork. Artwork by Ryan Sook.

Interestingly enough, I didn’t want the supervisory position because I felt I had a calling to lead people on their path in professional development or because I wanted to lead a technical group to some particular innovation. In my 23-year-old brain, I believed my talents were my ability to grasp the “big picture,” figure out personalities involved, and help a group of people bring any task to a conclusion. I was also pretty insecure about my technical abilities. I got good grades in school, I understood the material, and I enjoyed solving real problems during my internship, but I knew that there were better, smarter engineers. It seemed that whatever technical knowledge I had, it would be outdated in a couple of years, so moving into management and dealing with people seemed like a good career path.

And it paid better.

However, my plans of domination over the company came to an abrupt end when I left the company less than a year later and joined NASA as an Instrumentation Engineer working at the National Full-Scale Aerodynamic Complex (NFAC), which is a complex of wind tunnels in Mountain View, California.

I was hired as a junior member of the technical team, but I very quickly set my sights on…a supervisory position. In this case, it was an organization made up of Instrumentation Technicians and Instrumentation Engineers building up test articles, designing data acquisition systems, supporting wind tunnel testing, and working on upgrades to the facilities.

I set out to learn as much as I could about the “ins and outs” of the job, and the different groups that the organization interacted with.

I didn’t notice at the time, but I was having some remarkable experiences. I worked in every facility that was part of NFAC – I got to work in wind tunnels owned by other organizations, and I was part of a wind tunnel test of fixed wing aircraft (like F-18), trucks, parachutes, and rotor systems (like UH-60). I stared developing a specialization in rotor testing and grew as both an engineer and a person. Before I knew it seven years had flown by – and more opportunities came my way.

The wind tunnel group was re-organizing, and some opportunities to move up the professional ladder became available. I got the position that I was aiming for, and I felt I had started on my path.

And then the reality set in. There were some awesome aspects of that position. I enjoyed being involved in all the preparation for testing and all the actual testing, and I enjoyed thinking ahead and setting technical goals for the group to improve our processes, but I didn’t really expect to deal with SO MUCH PAPERWORK.

I also didn’t realize how much conflict resolution had to be dealt with in the middle management position, and I just wasn’t ready for that. And did I mention the paperwork?

It is easy to imagine yourself being a manager who rewards productive, conscientious employees and who inspires everyone to try harder and work smarter, but unless you are a natural born leader to whom this comes intuitively, it is important to give this some thought and find a mentor that can help show you the way. There are also lots of training opportunities available…it seems that not only are there internal leadership courses available at most companies, there is a whole seminar industry for bringing up future leaders. It doesn’t hurt to check that out.

I decided that managing folks was not something that I wanted to do at that particular time, so I started looking around for an opportunity to get back into engineering. NASA is a big enough entity that this was possible, especially because I did develop a specialty. Eventually, I transferred into a different group, working as an engineer. No doubt, my career and earning potential slowed down a bit, but I continued doing the work that I enjoyed.

My current manager noticed that I enjoy working on bigger projects with multi-disciplinary components. We had some discussions about future possibilities and I was recently unofficially assigned a number of mentors and given a variety of projects to complete. Slowly, the projects are getting more complex in the scheduling, budgeting, and execution. As time goes on, I am finding that being a supervisor might not be my calling (never say never), but project managing has all the components of the job that I enjoy – and not as much paperwork!

Editor's Note: This blog post was written by Alex Sheikman, an engineer at NASA and a comic book illustrator. Alex works at NASA's Ames Research Center in Moffett Field, California. He is currently serving as the Project Manager for the development of Tiltrotor Test Rig (TTR).