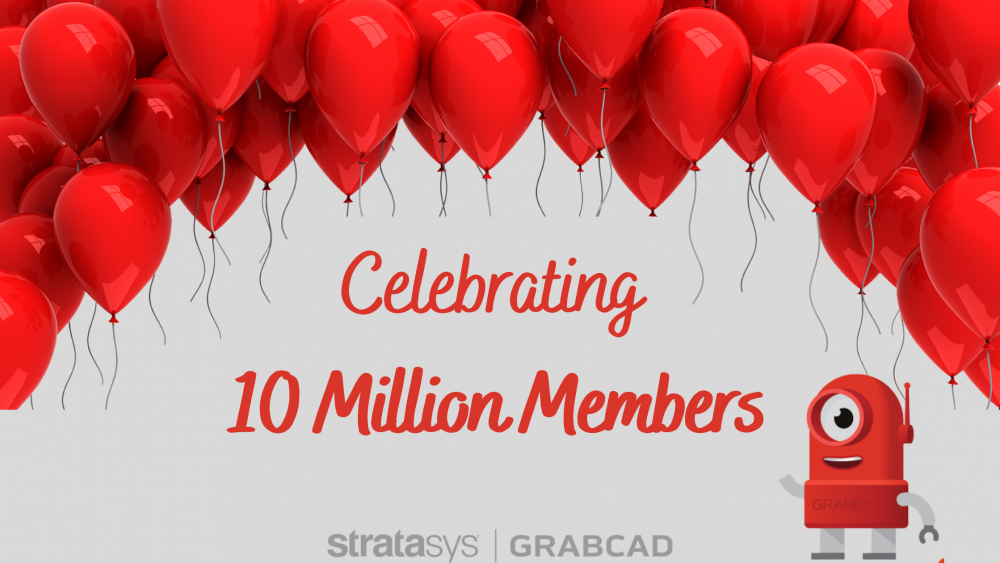 The GrabCAD community has faithfully stayed together for more than 10 years! It has seen millions of models be uploaded and downloaded, thousands of tutorials created, hundreds of specialised groups, and tens of challenges for the community to participate in.

In less than 3 years the community has grown by leaps and bounds and added another 4 million members to reach over 10 million members. When 2017 rolled aroung we challenged the community to create a trophy celebrating 4 million. Lastly, in 2019 we asked them again for a trophy to commemorate 6 million. Having us grow year over year is always special, but seeing us all cross 10 million was mind blowing.

This year we saw some pretty incredible results from this 10 million challenge and we want to sincerely thank everyone who participated in this challenge and supported us and each other throughout the years. We wouldn't be where we are today without members like you

So without further ado here are the winners: “The placement of the GrabCAD colors were tasteful without being overshadowed by the pale gold 10 M lettering. Having little details like the GrabCAD name at the rear of the trophy, the crown was tapering up to form a sort of back wall and enclosure for the lettering itself, and the bearing transforming into a gear was a great touch. The sizes of each of the trophy features were also very proportional without being overly complex which also makes it very printer friendly!” “This design was very very sleek. Choosing to include the XYZ plane markers as back walls for the trophy was very aesthetically pleasing and subtly calls back to GrabCAD Print. In fact, the way the trophy itself is designed looks like a tray ready to be printed! The only things we were worried about was how durable those walls would be when post processing that after being printed on a polyjet printer. Other than that, this was very pretty.“ “A very simple and clean design that reminded us of our humble beginnings. The gear based trophy was also very reminiscent of our golden gear awards way back when. There is just enough attention to details when it comes to the colors. This trophy is clean, straight to the point, and tells you everything you need to know all the while being the most printer friendly out of all of our finalists.”

Once again we’d like to thank you all for supporting us every step of the way and for helping us celebrate this amazing milestone! Here’s to many more years of GrabCAD.