After considering the increasing strength of FDM materials in my last post for the GrabCAD blog, it seemed fitting to move onto other 3D printing processes. In the final words of that post, I highlighted how the “application is the key, and finding the right solution in terms of strength but aligned with economic viability and added value is the goal.”

When it comes to 3D printing processes, in 2017 there are a number of professional options with a variety of capabilities, but as has been the case since the technologies first emerged at the end of the 1980’s, no single process provides that silver bullet and can fulfill all requirements for all applications. 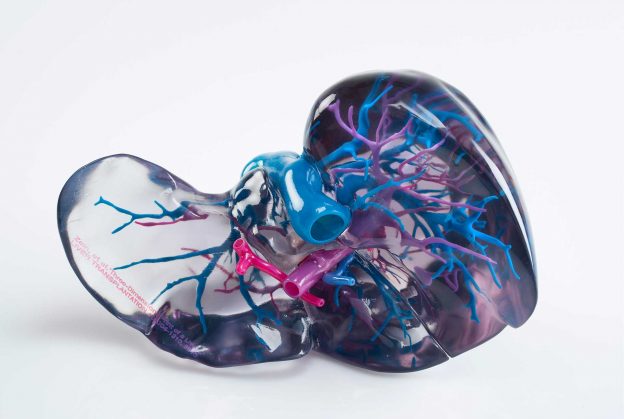 There is always a trade-off. One of the most common trade-offs being strength versus accuracy. When accuracy is the highest priority, the 3D printing process that often comes out on top is material jetting. In a familiar pattern across the 3D printing industry there are numerous terms used synonymously with “material jetting,” including but not limited to photopolymer jetting or polyjetting, drop on demand (DoD), Thermojet printing, inkjet printing, and multi-jet modeling/printing.

Material jetting is one of the seven process classifications as defined by ASTM, and today there are multiple vendors of a variety of hardware and materials that fall under this category, notably Stratasys, 3D Systems, Keyence and XJET, with others entering the market and conducting research in this area.

The key driver behind the material jetting process is, absolutely, the development of inkjet print heads capable of directly 3D printing functional materials in three dimensions. Wax and photopolymers are the two primary material categories utilized for material jetting today; but new classes are emerging for metal and ceramics as further evolution and industry growth continues apace, most notably with the development of the NanoParticle Jetting process from XJET.

Typically, the liquid material is directly jetted onto a build platform — using either a continuous or DOD method from a series of hundreds of nozzles in the inkjet printhead — where it solidifies or is cured using UV light depending on the material type. It is this that gives rise to both the key advantages and disadvantages of the process. The deposition of such precise drops achieves the highest possible 3D printing accuracy, with minimum layer thicknesses down to 0.013 mm, which allows for minimum feature sizes of 0.1 mm and tolerances of ±0.025 mm. On the downside, however, because of the nature of the liquid materials that can be used, the number and type of materials available is limited and rarely standard. Moreover, strength and durability of this type of material is also limited for many functional applications.

The origins of this direct 3-dimensional process with wax date back to 1994 when Solidscape was founded, although then it was called Sanders Prototype Inc. The company had developed 3D wax printers specifically for creating prototypes and accurate master molds used for investment casting. In 2011, Solidscape was acquired by Stratasys, but still operates independently. In 1996 3D Systems introduced its first material jetting platform, the Actua 2100, which used an inkjet mechanism to directly print only wax materials. This was superseded in 1999 by 3D Systems’ ThermoJet platform and evolved, over time, into its MultiJet Printing (MJP) process, which exists today and includes photopolymers. Material jetting with photopolymers first emerged during the same decade, in 1998, when the Israeli company Objet Geometries (which, in a well-known story, merged with Stratasys in 2012) developed its proprietary photopolymer inkjet printing technology. The commercial name was PolyJet, which remains today, and the first system released to the market was the Quadra platform, which utilized 1,536 nozzles within the printheads to jet the photopolymer build material simultaneously with the gel-like support material.

Indeed, this is another unique advantage of the material jetting process — the ability to print multiple materials at the same time. Most commonly two materials were printed directly, the build material and the support material which is later removed. However, as the technology has evolved and matured, today it is possible to print multiple materials within the same part as well as the support material. This means that parts can now be printed that are functionally graded and exhibit combined material properties, and, notably, full color capabilities.

Stratasys’ Objet Connex brand of 3D printers were the first to incorporate 3D printing technology that could process materials in this way. The ‘Digital Materials’ concept (first developed in 2011) introduced the ability to combine two or more of the expanding palette of PolyJet photopolymers in specific concentrations and microstructures to create a composite build material with hybrid characteristics.

The range of materials for 3D printing in this way continues to expand, but remains limited within the broader context of manufacturing. However, a brief overview of material types and their characteristics includes: standard, rigid, opaque plastics; flexible, with a range of Shore X hardnesses; transparent, up to 100%; high temperature; ABS-like; water resistant; castable; and medically certified.

Today, the most advanced 3D printing platform in this regard is the J750 from Stratasys (‘J’ is for jetting). In terms of multiple material capabilities, the J750 permits the use of up to six materials within a single build, including the combination of rigid, flexible, transparent, or opaque materials and their composites as well as more than 360,000 different color options.

When it comes to applications areas, however, material jetting has not yet been able to break down the barrier to manufacturing/production, and is still firmly within the realms of prototyping as well as for casting and tooling applications. The value of these applications should not be underestimated though, particularly when so much media coverage places such an unbalanced emphasis on 3D printing as a production tool. It is, but it is also so much more than that.

Some of the key application areas for material jetting hold phenomenal value for industry, including, but not limited to:

The true value of 3D printing is always application-specific, whether that is prototyping, tooling or manufacturing. It’s always about finding the right solution for the right application and thus looking way past the headlines from vendors and the tech press.

The progress of material jetting since the 1990’s is remarkable, but it doesn’t stop here. Rather the growth curve is likely to grow exponentially. Just some of the next steps are highlighted here:

XJET, based in Israel, is a relatively new company in the 3D printing world that introduced its proprietary NanoParticle Jetting process in 2015. However, that belies the knowledge and experience held by the company. It’s founder, Hanan Gothait, was also a co-founder of Objet Geometries, and many of the executive personnel at XJET have a similar history.

The NanoParticle Jetting (NPJ) process does fit in the material jetting category of 3D printing, I believe, because it is a direct jetting process using inkjet printheads. That said, it also differs from the “traditional” material jetting processes in that the nano particles are precisely delivered to the build platform in a proprietary solution. NPJ has just reached full commercialization with ceramic materials, with the first CARMEL platform was deployed this month. Metals are set to follow next year.

According to the joint announcement from the companies: “the benefits come from Xaar’s industrial inkjet printheads with TF Technology ink recirculation and the newly released High Laydown Technology combined with BASF’s newly developed photopolymers. Xaar’s High Laydown Technology enables high deposition rates of up to 20 l/hr with addressability of 720 dpi with the Xaar 2001+. Additionally, Xaar’s low energy Chevron actuator and TF Technology enables use of high viscosity and high particle-loaded fluids. BASF’s new photopolymers have been developed to complement Xaar’s printhead specifications in order to deliver high productivity and improved parts properties.”

I suspect there is also a lot of R&D in this area that we have not heard about – yet!