How Vending Machines Are Reshaping the 3D Printing Industry

The self-service industry has been around for more than two decades, but the emergency of 3D printing vending machines could change both that and the 3D printing industry. Self-serving machines such as self-help kiosks and vending machines have served a wide range of clientele including retail, entertainment, travel, financial services, and healthcare among others. You must have used a self-help kiosk at a hotel, an airport, or a restaurant such as McDonald's or a vending machine at the cinema or your office at some point.

Up to this point the use of self-service kiosks was limited to checking in at a hotel or getting a snack. However, now vending machines can dispense 3D printed objects. No, I'm not talking about a gadget right out of the next Star Wars movie. 3D printing vending machines are very much real, and they are here to stay. Let's see how this disruptive invention is changing the 3D printing industry.

Though students at the University of California, Berkeley had state-of-the-art 3D printers, they often had to wait for weeks or even months to use one of them. Tired of waiting, three Berkeley graduates decided to take the matter into their hands to resolve the 3D printing service shortage on the campus. The first Dreambox prototype was released at the UC Berkeley campus on March 25, 2013. 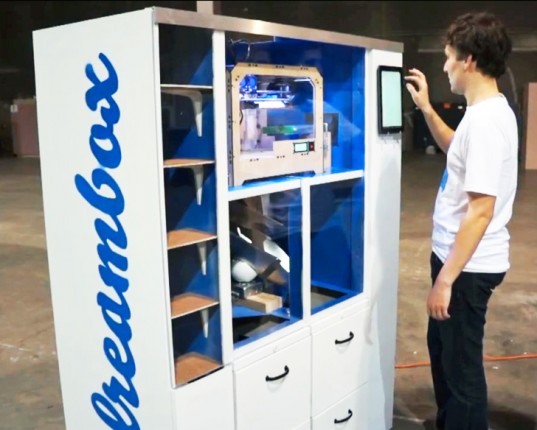 A picture of the Dreambox prototype on the UC Berkeley campus.

The most important factors the Dreambox team considered when designing the vending machine was convenience. Students can upload a design either online or on-site via a USB stick. It is then added to the queue. The 3D printed object is printed and dispensed in the vending box. The student is then informed via a text message. Each print may cost around $15 or more depending on the design. The printer allows users to create customized models from a large selection of materials as well.

Another 3D printing vending machine, the Innovation Station, was designed and built by Cockrell School of Engineering students led by associate professor Carolyn Seepersad in 2014. It was also created to provide increased access to 3D printing at the university.

Students could upload a CAD file to the online portal. After the design was reviewed and approved by Seepersad and the Innovation Station team, it was put into the printing queue. Just like the Dreambox, the user received a text message informing them when their design was being printed. However, after two years of operation and more than 1,000 successfully printed parts, the Innovation Station was permanently retired in September 2016.

Students Marco Tomasello, Daniele Caputo, Vincenzo Virruso, Vittorio Maggiore, Toni Taormina, and their teacher Daniela Russo, wanted to find a way to get youngsters involved in environmental conservation. That was the inspiration behind this unique invention. The MyProAction team grabbed the prestigious AXA Italia Social Impact Award in a national contest for building this ingenious gadget. AXA offered the team a paid educational trip to Paris where they met with the experts of AXA's Strategic Ventures. AXA's team has dedicated $200 million in venture capital funding for strategic innovation in insurance, fintech, and health.

The machine turns used plastic waste such as bottles and containers into small pellets. The pellets are melted into a plastic thread which is used to 3D print smartphone cases for select phone models. The printing process can take somewhat longer. So, whether you get a predesigned phone case or one is delivered at the spot isn’t clear yet. Still, it's a pretty cool device. Installing this device at high schools and universities where young people hang out can help recycle considerable plastic waste.

We are all interested in eating healthy and fresh food every day. What if the vending machine in your office could print a wholesome snack instead of dispensing a sandwich prepared the night before? VTT Technical Research Centre of Finland Ltd is trying to develop a high-end vending machine that can make 3D printed customizable snacks and treats. In other words, you could get a pastrami sandwich that looks like a burrito or a banana split that looks like a cupcake. The only limit is your imagination. 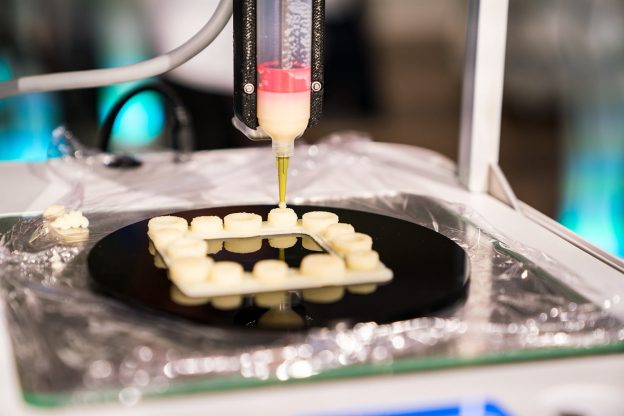 The researchers at VTT want to capitalize on the trend of eating healthy, nutritious and freshly prepared foods that look as good as they taste. The ambitious project will combine food materials science and 3D printing technology. The research team has already started testing starch and cellulose-based food materials, while it is still experimenting with different proteins including oats, faba beans, and whey.

Of course, particle size and rheological properties of the food material is still a huge barrier. It is also a challenge to combine different textures such as extra crispy toppings, crunchy and soft layers, as well mass producing tastes that everyone likes. However, Nesli Sözer, Principal Scientist at VTT who leads the research team, is quite confident that a 3D printing vending machine that can serve personalized snacks will be here soon.

Consumers have embraced the idea of the self-service kiosks for years now. In recent years, however, researchers and tech companies across the globe are trying to take this concept to a whole new level by combining the vending machine concept and 3D printing technology. The increased demand for customized 3D objects is the driving force behind it. 3D printing vending machines will soon become mainstream, ushering in a new era of highly personalized additive manufacturing for the average Joe.

Customizable 3D printed food and other products straight out of a vending machine sounds cool, but see why currently everything can't just be 3D printed.

Ann Neal (Twitter: @Ann_G_Neal) is a writer who covers technology and business. She is passionate about music and loves to play guitar in her free time with her cute pooch listening quietly.