Engineer Notes: Jellyfish Chips, the Fountain of Youth, and How to Be a Winner

In this week’s edition of Engineer Notes, we compiled a few newsworthy engineering and tech articles as well as some other things to keep an eye out for.

How to Be a Winner

Have you ever wished that you could be a little more confident or a little less aggressive? Well, thanks to a group of Chinese scientists at the Chinese Academy of Sciences, manipulating your brain using light might just make that change possible. Using what they called “winner” mice and “loser” mice, these scientists tested the effects that stimulation to the dorsomedial prefrontal cortex (dmPFC) would have. To test whether this stimulation turned the “loser” mice into “winner” mice, they used a technique called the “Dominance Tube Test.” This test consists of putting two mice on opposite ends of a tight tube and observing which mouse pushes the other out of the way in order to exit the tube. After stimulation of the dmPFC in the “loser” mice (the mice that got pushed), they became “winner” mice (the mice that did the pushing) 90 percent of the time. And when this stimulation was administered to the “winner” mice, the opposite effect took place. So is it possible that your effortful behavior and social dominance can be controlled and manipulated? It is. This study opens up a world of possibilities for individuals who are too aggressive, or not aggressive enough. But it will take a lot more time before it can be safely tested in humans.

To all the potato chip lovers out there: get ready for a new version of your favorite salty snack. Jellyfish may just be the next big thing in the junk food category. Scientists have come up with a way to make this overpopulated fish into a crispy, lightweight snack. By making improvements on a centuries-old technique, researchers have made this fish, which has been consumed for more than 1,700 years, more appealing to the western side of the world. Bringing jellyfish into our diets would not only diversify our food chain, but it would help reduce the jellyfish takeover that is happening in our oceans. Our current collection of food sources will soon not be enough for our world’s growing population. For that reason, we have to start looking at more obscure places to get our food supply. Although the nutritional value has not yet been discussed, a member of the team that has come up with this new technique says “the mouth feel and the aesthetic appearance…have gastronomic potential."

An End to Addiction

The opioid epidemic has become so deadly that the Opioid Commission asked President Donald Trump to declare a state of emergency. Between 1999 and 2015, the amount of opioids prescribed per person tripled (although amount of pain stayed the same) and over two million Americans abused prescription opioids for pain relief. With these statistics in mind, researchers have been working vigorously to put an end to this crisis by creating solutions for pain that are non-addictive. One such solution is a spinal cord stimulator that works by sending mild electric currents to nerve fibers in the spinal cord. One advocate and receiver of this stimulator, Terri Bryant, was taking opioid medication for her chronic back pain for more than 10 years. She was constantly worried about opioid addiction, but after getting the spinal cord stimulator put in place her pain decreased immediately and she was able to stop taking fentanyl. Although the device requires surgery, its benefits surpass those of opioids 1) because it is non-addictive and 2) it is a one time operation that creates tremendous benefits. Solutions like this are what will stop over 142 Americans from dying everyday.

The Science Version of the Fountain of Youth

The long sought after fountain of youth may have just been discovered. Although it does not come in liquid form, nor does it come spewing from a cascading fountain, it has shown promising results for reverse aging. Researchers at the Houston Methodist Research Institute have found a way to make aged cells younger by targeting the telomeres of a person's cells. Telomeres are the caps at the end of chromosomes whose length roughly corresponds to age. The team worked with children with progeria, a genetic condition that causes rapid aging, and noticed that children as young as one year old had cells that were similar to those of a 69-year-old. Using RNA therapeutics, they delivered RNA directly into the cells, which then caused the cells to produce the protein that lengthens telomeres. After the manipulation of the cells, markers of aging in the children’s cells were significantly reduced. Immortality may not be on the horizon, but with this type of advancement in cell therapy, age-related disease that plague us might soon be a thing of the past.

Imagine being able to tell whether or not you had over ten different diseases all with the exhale of a breath. This may be the reality in the next three to five years thanks to Noushin Nasiri and her nanotechnology-using sensor. Currently, there are 17 diseases that give off biomarkers that can be found in human breath. For example, high acetone levels is a biomarker for diabetes. By being able to detect a certain disease in the breath, there is a much higher chance that early detection would be possible since other screening tests, like blood tests, can take up to two weeks to give results. The science behind the sensor consists of nanotechnology. Using this type of technology, the sensor becomes hypersensitive to nanoparticles and can calculate the concentration of that biomarker. From the provided concentration, a particular disease can be determined. The ultimate goal for Dr. Nasiri is to make the world’s smallest version of a sensor of this type that can detect 10 diseases in one breath and be small enough to be embedded in your smartphone. As of now, she believes that she is only about three years away from her base product hitting the market. 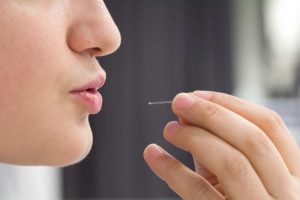