At the end of 2017, robotic history was made. Two years after the challenge was posed, the world’s first giant robot duel took place in September. And, in case you missed it, I’m breaking it down.

In the summer of 2015, MegaBots (a US company that specializes in building giant fighting robots) completed its construction of America’s first giant piloted robot, the Mark II – a 15-foot tall, 12,000lb hunk of metal capable of hurling 3lb projectiles at speeds of over 130 mph. 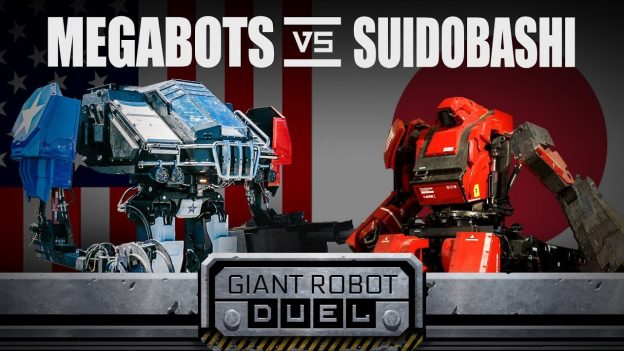 "We have a giant robot, you have a giant robot—you know what needs to happen," MegaBots announced in their challenge video. The San Francisco based company was founded back in 2014 and its co-founders Matt Oehrlein and Gui Cavalcanti said staging a giant robot duel had been a dream since childhood.

For a generation that grew up watching Mecha Anime battles between colossal, weaponised titans, this was fantasy becoming reality.

“Many people grew up playing video games, watching movies, or reading comic books that feature giant robot battles,” Oehrlein told me. "This is just the next step in embracing that fascination," he explained.

THE DESIGN AND CONSTRUCTION PROCESS

This was a battle that partly took place behind the scenes during the design, construction, and testing phase. Unsurprisingly, a lot of hard work goes into making two giant robots able to fight one another.

“It takes about a year and 15 people to build a robot,” said Oehrlein.

The battles themselves take mere minutes.

“There is a lot of state of the art hydraulics technology in our robots,” said Mr Oehrlein. “We’re talking ultra-fast high-flow valves, DARPA-grade robotics software, and reinforced steel plate armour.”

The clash of metal “monsters” was recorded at a Japanese steel mill about 60 miles north of Tokyo. The 28-minute video of the fight was streamed on the MegaBots Twitch channel, receiving almost 1 million views.

MegaBots surprised viewers by showing up with not one, but two giant robots, their updated Mark II(Iron Glory) and Mark III (Eagle Prime), to compete against the Japanese Suidobashi’s sole gladiator, Kuratas.

The first round didn’t last long. The 13-foot-tall, 6.5-ton Kuratas charged at the 15-foot-tall, 6-ton Iron Glory which – despite its 100mph cannon firing ability – was no match for the Japanese robot.

Kuratas was equipped with twin Gatling guns, a targeting system and four-wheeled legs that let it zip around with ease. It was much smaller and less powerful than Iron Glory, but it was speed that mattered most in this fight. Kuratas used its 1/2 ton giant fist to swing a knockout punch to Iron Glory, and it was game over.

A clear victory for Japan in the first round prompted MegaBots to crack out the big guns. Enter Eagle Prime, with its 430 horsepower. Captain America vibes were going strong - think red, white and blue, and a flashing bald eagle head. Eagle Prime is an upgraded version of Iron Glory, weighing twice as much as its predecessor. It towered over Kuratas at 16 feet tall.

A drone came out of nowhere and shots were fired. But in the end, Round 2 was a draw, since the robots got, um, stuck.

For Round 3, Eagle Prime exchanged its cannon arm for a 4-foot-tall, 40-horsepower, stars-and-stripes chainsaw originally designed to cut through rock. In a spectacular finish, Eagle Prime cornered Kuratas and was declared the victor.

So, what does the future hold for giant robot wars? Well if the 2017 battle is anything to go by, it’s clear these real life Mecha are capable of some pretty serious destruction and that their battles attract a fairly sizable audience.  However, we are still a long way from giant robot technology that matches that which is depicted in movies, video games, and cartoons.

In terms of MegaBots, the company has recently partnered with Freejam games to put the Eagle Prime Mk III into Robocraft.

“We’re excited about bringing our designs into more games and movies,” said Oehrlein.

“The dream has always been massive robot fights in a stadium-sized venue. Who knows, the next billion dollar sports league could be giant robots that fight to the death,” he said.

Only time will tell if this large-scale vision will become a reality. One thing’s for sure, a lot more money will need to be invested into the sport if anything is to compete with the Eagle Prime and its subsequent generational versions. The audience is there, so let’s see if supply can match demand.