3D Printed Fashion: How Designers Are Pushing the Boundaries

From cutting costs and increasing efficiency to prompting innovation, 3D printing has had an undeniably significant impact on the manufacturing industry in recent years. Thanks to advances in material science, digital design and on-demand production capabilities, we are seeing industry-wide change. From the realms of aerospace and prosthetics, to cars, sports and food, manufacturers are tapping into 3D printing technology to improve and revolutionize their production processes.

One sector where we are seeing some interesting advancements is the fashion world, as designers and fashion houses continue to experiment with state-of-the-art 3D printing techniques. As with other industries, 3D printing in fashion offers clothing manufacturers the chance to produce prototypes and final products in a way that saves time, money and manpower.

3D printing in the world of fashion is still very much in the primary stages, but it’s certainly something to watch. 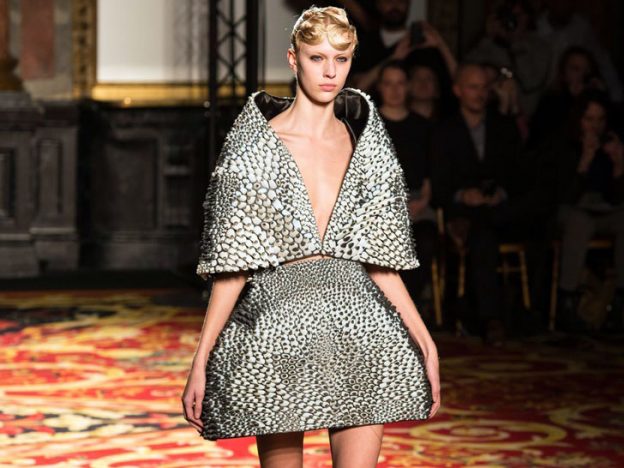 Industry heavyweights predict a trend of hybridization in the fashion world in the coming years whereby 3D printing technology is coupled with traditional methods to produce hybrid creations that reflect the best of both worlds.

While 3D printing in the fashion world has come leaps and bounds in recent years, it is by no means a brand new phenomenon.

So where did it all begin? Dutch designer and trailblazer of 3D fashion printing, Iris van Herpen, was the first to ever send a 3D printed fashion piece down the runway. Since the debut of that first piece, “Crystallization” in 2010, van Herpen has continued to make her mark in the world of 3D printing.

Never afraid to push boundaries, in 2013 van Herpen worked with photographer Nick Knight. He captured images of the way water moved when splashed on the naked body, and she turned those images into garments. Van Herpen also produced a dress as part of her Ludi Naturae collection which was fabricated using thermosetting polymers extruded by a 3D printer. These were then exposed to ultraviolet light to set, and tulle fabric was inserted into the printer bed during the 3D printing process. The dress could not be printed in one go, but was instead created in 30 x 30 cm patches that were then sewn together into a final piece. 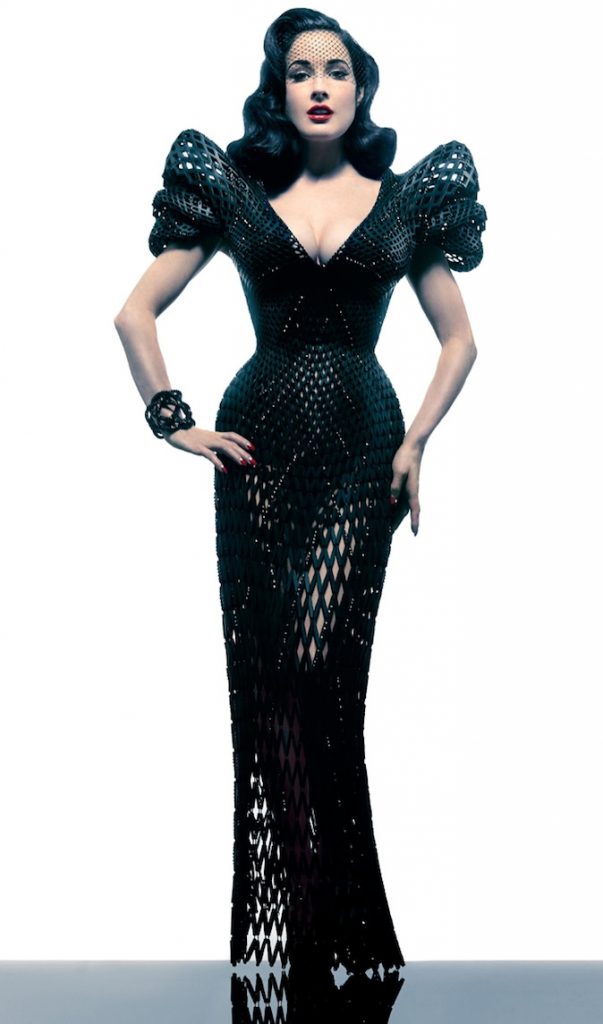 Then came Manus x Machina, the Met Costume Institute’s spring exhibition for 2016. It embraced 3D printed clothing and explored how fashion designers are merging the handmade and the machine-made. As the technology is adopted by more and more clothing manufacturers, it has the potential to trickle down to the masses, according to the exhibition’s curator Andrew Bolton. When that happens it could be as revolutionary as the sewing machine, he said.

“It means you can 3D print your dress to your exact measurements at home,” Bolton said. “It’s environmentally friendly, too. There’s no waste, whereas there’s always waste with textiles.”

In August 2017, 3D-printing company Ai Build and luxury fashion brand Bottletop collaborated in a bid to instil sustainable values into the fashion industry by tapping into 3D production techniques.

Daghan Cam, Ai Build’s co-founder and CEO said: “What is so special about 3D printing is that it opens up the possibility to control precisely where every single drop of material will be placed to form a physical object. That basically means that the material is deposited only where it needs to be, in contrast to conventional subtractive manufacturing methods which can be extremely wasteful.”

He added that since the fashion and construction industries are two of the biggest contributors of environmental pollution today, the project demonstrates how cutting-edge technology can become the solution for such problems.

“It combines textiles and additive manufacturing by applying materials and auxetic structures that consider function and the human body,” she explained.

Italian designer Simone Leonelli often uses 3D printing to make his pieces. In September 2017, Leonelli had a 3D printed fashion exhibition at the Perth Institute of Contemporary Arts (PICA). The pieces – including shoes, a dress and a bag – were fabricated on a FDM desktop 3D printer. Rather than actual pieces of clothing a person could feasibly wear, he explained that the designs “should be understood as architecture or as a design experiment.” 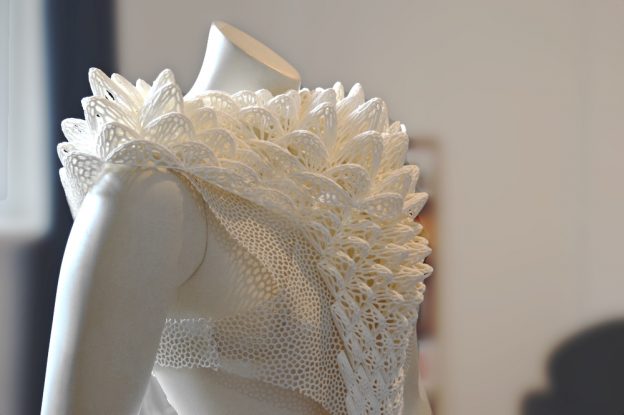 However, the major problem with the majority of 3D printed clothes has been with the materials and feasibility of wear. At present, 3D printed clothes absolutely cannot match up to the softness or wearability of a cotton shirt or cashmere jumper. The synthetic materials that are currently commercially available for 3D printing, such as polylactic acid, are not comfortable or flexible enough for most clothing. They print as solids that don’t have spaces to let air pass through like with conventional fabrics. Subsequently, they don’t absorb body moisture and they are neither breathable nor drapeable.

With that being the case, much of the focus so far has been on 3D printed accessories (jewellery, eyewear and footwear) which aren’t as reliant on the comfort factor.

Assistant Professor of Textile Materials and Engineering at Heriot-Watt University, Danmei Sun, believes that a “promising avenue” to tackling the issue is to produce clothes that combine 3D printed panels with traditional textiles, making them more appealing and comfortable.

What’s more, specialist 3D printers will need to be made specifically for fashion garments. These would ideally print fabrics that allow air to pass through the material, as mentioned above.

What Does the Future Hold for 3D Printed Fashion?

At present, 3D printing is arguably more suited for accessories than clothes. The experimentation of fabrics for 3D printing has been limited and there remains a trade-off between robustness and comfort. Still, 3D printing of clothes should not be written off since it holds potential for major innovation in terms of business models and consumption patterns for fashion brands. There is certainly room for research and experimentation, but overcoming the problem of material will be imperative.

Clothing manufacturers should embrace 3D printing as part of an evolving fashion world that allows them to innovate with new materials and designs, therefore creating new concepts and processes.

How close are we to being able to 3D print clothes at home or see aisles and aisles of 3D printed clothes in your favorite boutique or department store? Close but no cigar pretty much sums it up. While a handful of companies and designers are experimenting with the technology, we are still far off from this being an everyday reality in the fashion world. It will be a slow process, but if we are to look at the last few years as any indication of progression, change may come sooner than we think.

Industry heavyweights predict a trend of hybridization in the fashion world whereby 3D printing technology is coupled with traditional methods to produce hybrid creations that reflect the best of both worlds. Such a trend would be apt in the wider context of the current 4th industrial revolution, characterized by a fusion of technologies that is blurring the lines between the physical, digital, and biological spheres.

3D Printing a Game-Changer for the Sneaker Industry