Gasoline engines aren’t dead, at least not yet. Even though Volvo says it won’t pour any more resources into developing more gasoline tech, other automakers think the internal combustion engine will have legs for a couple more decades or so.

One promising innovation is the headifold, or an integrated exhaust manifold. As the name implies, it’s a part of the engine, instead of being a separate bolt-on. That sounds strange, but we live in a time where turbochargers exist between V-8 cylinder banks and other oddities. 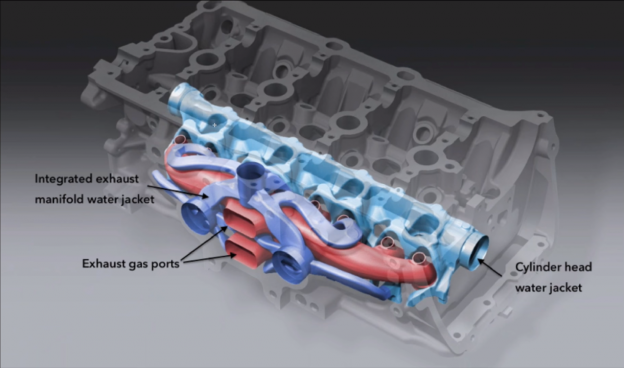 The single biggest benefit is that the exhaust manifold is cooled by the engine’s water jacket. That means as the coolant flows around, it soaks up heat from the exhaust gases. People used to think that wasn’t necessary, but thanks to modern tech, engineers have started realizing doing this boosts efficiency.

It doesn’t matter if the exhaust gases are hot. But, that extra heat from the integrated exhaust manifold heats the engine up quicker. When an engine is cold, it’s horribly inefficient. That’s why it’s better for fuel economy to go to your furthest errand first, then work your way back toward home.

With quicker warmup times, the integrated exhaust manifold gets oil in the engine flowing better at first. In case you’re not aware, revving a cold engine can cause serious damage, because the oil hasn’t fully lubricated all the parts, particularly in the cylinder heads. This design expedites the process. Improved lubrication also boosts engine efficiency, so you burn less fuel. It also means the engine will last longer, conserving even more resources.

On cold winter mornings, you just want your car to warm up quickly. An integrated exhaust manifold will make that happen so much sooner. That means all this arguing about letting your ice-cold vehicle idle in the driveway for whatever period of time could be a thing of the past. That means less pollution, fewer cars stolen out of driveways, and you getting to work on time.

Faster warmup also helps if the car has a turbo. The integrated exhaust manifold lends itself to quicker spool-up and faster response, because the pathways exhaust gases need to travel are significantly shorter, eliminating the dreaded turbo lag. Also, the exhaust gases exit the turbo at a lower temperature, then they travel through the intercooler and the temperature drops even more. By the time they reach the intake manifold, the air is denser, which means improved efficiency and more power. That’s a nice performance benefit.

You probably don’t think about it, but at high engine loads the increased exhaust gases can harm the catalytic converter. Anyone who’s had to buy a new converter knows they’re not cheap, thanks to the precious metals inside. By cooling the exhaust gases in the manifold, engine control units don’t have to inject more fuel into the cylinders to prevent damage, which is more effective. A richer air-fuel mixture will prevent catalytic catastrophe, but it means you’re stopping at the pump sooner. The fuel economy percentage gains from this alone can be in the double digits.

By bringing the exhaust manifold into the engine, engineers are actually making more space available in the engine compartment. That could allow for more legroom in the cabin, which is always nice. Or, engineers can leave the space, so your mechanic can perform work easier. That means quicker repairs and lower labor costs.

This design also sheds some weight. Gone is the heavy cast iron manifold, plus those chunky bolts, gasket, and in some designs a heat shroud. Automakers are looking for all kinds of practical ways to drop curb weight from models. It improves fuel efficiency, quickens acceleration, sharpens handling, and reduces braking distances.

Before you get too excited, an integrated exhaust manifold does present a challenge. That extra heat puts more strain on the cooling system. If you’ve been stranded on the side of the road with that sweet-smelling steam pouring out from under the hood, you know that’s not good. Automakers must design the radiators, fans, etc. to be more robust, or we suffer the consequences.

Enthusiasts aren’t wild about how this design makes tuning a car more difficult. One trick is to swap out the exhaust manifold and install headers, improving exhaust flow. If you don’t like to tinker with your cars, that’s not a big deal. Plus, you can still swap out the rest of the exhaust, upgrade the turbo, etc.

Expect integrated exhaust manifolds to only become more popular over time. This and other innovations will keep internal combustion engines in the game, at least until electric vehicle tech fully matures.