The Pikes Peak International Hill Climb, also known as The Race to the Clouds, is an annual automobile and motorcycle race to the summit of Pikes Peak, Colorado, but this year's race might be even more extraordinary than usual thanks to 3D printing. 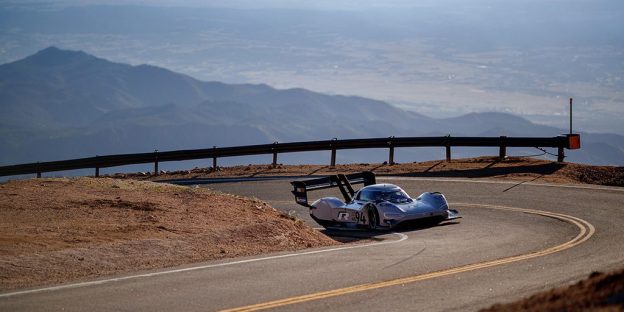 That’s high enough the air thins out, presenting a few problems. Internal combustion engines struggle to compensate for the reduced oxygen levels, which can cut peak horsepower by up to 30 percent. All cars must handle the decreased cooling effects of the air. And the thinner air means more extreme aero solutions are necessary. It also takes a toll on the driver, slowing reflexes, reducing muscle strength, and diminishing mental toughness.

Adding even more to the challenge are the many drop-offs along the way. Sadly, a fair number of racers have misjudged their vehicle’s capabilities and plummeted off the side of the mountain, paying with their life.

To say the hill climb pushes cars and drivers to the limit is putting things lightly.

The race has been going on since 1918 and consists of a variety of classes of cars, trucks, motorcycles and quads. There are often numerous new classes tried and discarded year-to-year. Starting in 2014, electric cars featured prominently in the winner’s circle, with Telsa winning the Electric Vehicle (EV) Production Class in 2016.

EV Production Class features mass-produced EVs that are readily available to the public, basically exactly the same as the model coming off the production assembly lime. However some limited modifications are allowed and the Tesla Model S that won the race was lightened by 790 pounds, featured a racing seat and a harness, a full roll cage, fire extinguishers, window nets, and a lighter battery than the production unit.

This year, on June 24, yet again something new will happen at the race. Volkswagen will enter their new electric vehicle “I.D. R” which contains over 2,000 3-D printed parts.

The car has been designed especially for the Pikes Peak hill climb and features a lightweight construction with aerodynamically-optimized body and the combined weight (including the driver) of less than 2,424 lbs.

It’s obvious Volkswagen engineers have been working overtime on this car. Two electric motors are contained in the chassis, a strategy that’s become fairly common with EVs. That means the car uses all-wheel drive, a big plus when you’re power sliding through dangerous mountain turns. Peak output is 680 horsepower and 479 lb.-ft. of torque, which doesn’t sound like much compared to the reigning champ.

Lithium-ion batteries like what you get in production electric cars are used in this racer. Energy recovery is big, with the motors working like generators when the driver brakes, converting some of that force into electricity that’s stored in the batteries. In fact, about 20 percent of the energy necessary for the race will come from the recovery system.

By the time the vehicle climbs the almost 5,000 feet required to complete the race, it will arrive at 35% thinner atmosphere than at the starting point. The downforce, that is created by the aerodynamic shape of the car and helps keep the car on the ground at high speeds, will go down by the same 35% between the start and the end of the race. Therefore, the aerodynamics and the shape of the car were a huge portion of the development effort.

Because of this change in altitude and the thinner atmosphere at higher elevations, the design had to generate as much downforce as possible without causing too much aerodynamic drag. To that purpose, Volkswagen used a 1:2 scale model of the I.D. R to optimize the car’s aero abilities in the wind tunnel. Volkswagen tested several different half-size scale models of the I.D. R before settling on the current configuration, which features a huge rear wing.

Upon the completion of the wind tunnel testing, as the program neared its conclusion, and started to shift between finalizing the shape and the building of the full size vehicle, Volkswagen needed components quickly. The engineers stated that about 2,000 parts of the actual full-size car were 3D printed.

Is it too much of science fiction to assume that in the near future, together with Unmanned Aerial Vehicles (UAVs) making individualized grocery deliveries to our doorsteps, we will also be able to custom 3-D print the latest model of our newly purchased electric commuter car?

The engine, chassis, and tires get delivered via a UAV into your driveway and a certified mechanic will come by to fit the 3D printed body, that you will provide, into a final assembly. With a big enough printer you will be able to choose any color you want and you can customize such things as rear view mirrors, door handles, flower holders, steering wheel shapes (if there are still steering wheels!), and air conditioning vents.

Do you enjoy 17th century Rococo style? Why not add swirls and cherubs to your wheel covers? Have a particular design pattern for the defrosters in your rear window? The possibilities are limitless and exciting.

And they just might be nearer around the corner than we even think thanks to 3D printing.

What Type of Cars Do They Make in China: Guide to Major Chinese Automakers