Geometric shapes. Rotational symmetry. Mathematical oddities. It’s not the expected arc for someone raised in a family of well-known writers and English professors. But if you’re wont to rebel against words, numbers are the way to go.

Bathsheba Grossman’s professional path may have veered from her family’s linguistic tradition, but fortunately some of that DNA rubbed off. When we talked recently by phone, I found her quick-witted and eloquently sarcastic. And you probably wouldn’t want to challenge her to Words with Friends if the stakes were significant.

Here’s what else I learned.

A lot of us owe her thanks

Bathsheba says she came to 3D printing around 1997 as a way to build models of things that were inherently hard to build – intricate shapes, repeating patterns, problems expressed in ways you can turn over in your hand as easily as turn over in your mind. But first, there had to be a practical, economical way to bring those visions to life.

She tells how she helped convince the printing marketplace and service provider Shapeways that it could be a viable business model, allowing consumers to go in, upload a part and get it produced.

For awhile I was the only person doing art parts in steel, then in 2009, Shapeways came together. I midwifed the process, helping them become more mainstream.

Geometric shapes and repeating patterns and surfaces can appear simultaneously simplistic and mesmerizing when turned into a three-dimensional object. Bathsheba explains the appeal of her work: “even people who aren’t math focused like being in the same room as geometry problems expressed as 3D piece.”

Why? Maybe it’s the rhythmic nature of the pieces that soothes us, maybe deep down we’re grounded by the unarguable order these shapes represent.

The ocean is a masterpiece

When I asked Bathsheba to talk about a particular piece of her work or series of pieces, she immediately went to her Biomorphs sculpture that she describes as “found on a beach far from Earth.” While the series is not her most commercially successful line, she loves them.

She’s fascinated by these simple animals that turn out to be very mathematical in form:

shells, radiolarians, sponges and jellyfish get their shapes from the physics of minerals and fluid flow, basically ignoring gravity. It's an absolutely alien world to our large-scale terrestrial one.

The conversation centers on diatoms, single cell algae that appear in a wide variety of physical shapes, but almost always are symmetrical. They sometimes come together to create beautiful repeating patterns that can look like ribbon, jewelry or the shape of stars.

She continues by posing a question: “why is it that there are some very simple patterns that do not appear in nature?” I couldn’t tell if she were asking with genuine wonder or rhetorically, as though the answer was obvious to everyone with a deep background in geometry who’s ever studied sculpture under Erwin Hauer and Robert Engman. If it’s the later, it’s a small subset I assume. 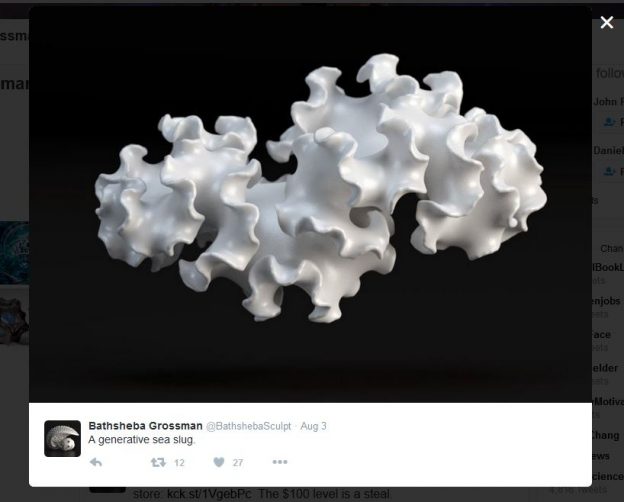 And after sea slugs? The Milky Way

In addition to her 3D works in metal, Bathsheba works in solid blocks of crystal, etching them internally with a high-frequency laser. The pieces are three-dimensional to give viewers a perspective they wouldn’t normally have, for instance, of the Earth’s magnetic field or the portion of our galaxy that is blocked by its core. My favorite, hands down, is the Calabi-Yau manifold, which visualizes string theory’s supposition that spacetime is not 4-dimensional, but 10-dimentional.

A sense of playfulness comes through, too, in these pieces, with etchings of “the world's most widely used psychoactive substance,” caffeine, and the hemoglobin molecule available for sale on her website.

Have we arrived at the 3D printing after party?

When pressed to describe what’s next for her work, she shaped her answer around what she feels should be next for the 3D printing world.

We’re in a phase where the low hanging fruit has been picked, and now the real hurdles are appearing. Very few radically new products are being introduced. For instance, I want greater material choice, but it’s not happening. I would like to work with glass, but new 3D processes don’t often succeed.

It’s safe to say that while the industry has stabilized, it still has plenty of headroom for those who can imagine things that are hard to make, and more importantly, imagine the way to make them.