"Before all this stuff came together, the things I was making were not possible to imagine or plan at this level of complexity.” -Josh Harker 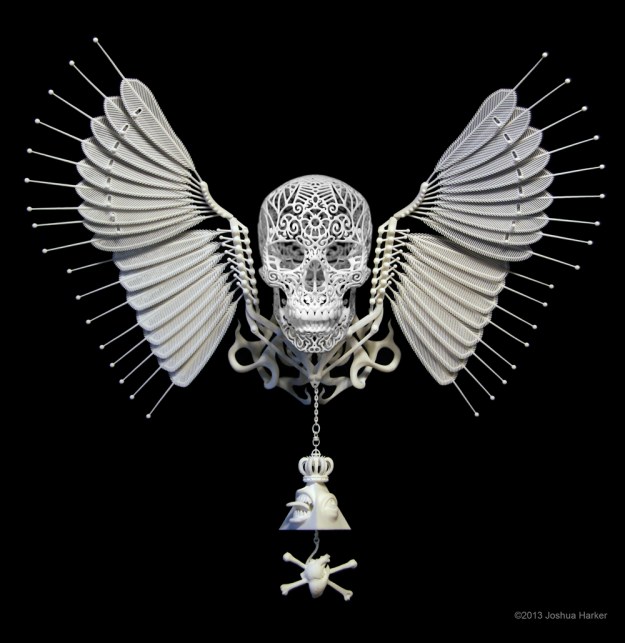 It’s been said that unreasonable people are the force that changes the world, because the rest of us, the reasonable people, are content to adapt ourselves to the limitations of the present circumstances.

So then Josh Harker might be one of the least reasonable (but so polite) artists you’ll ever meet. Because what he’s accomplished, even by today’s standards, seems nearly impossible. But to truly understand how groundbreaking his work is, you’ll have to consider it in context of what the state-of-the-art was 25 years ago, when Y2K scared as many people as Blair Witch and there was a Clinton in the White House.

Josh and I talked recently and he took me from dawn of time in 3D printing, through to the late 90s when he dove in with both feet. And he caught me up on his latest projects as well.

In the late 80s I was doing a series of drawings with an approach called automatism, a surrealist approach from the subconscious, because I wanted to understand the seeds of imagination. I think of it as ‘architecture of imagination.’ But to translate those thoughts into a physical representation was too complex, too intense to do freehand, or to sculpt in stone, wire, wood, clay, traditional media. 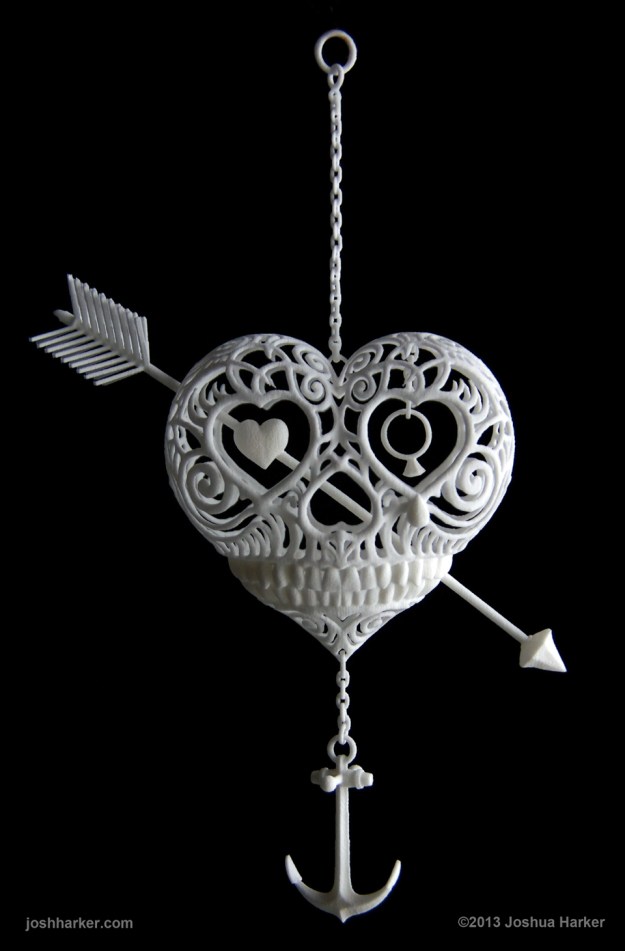 [full disclosure: I didn’t know what automatism was either, so I looked it up: the avoidance of conscious intention in producing works of art, especially by using mechanical techniques or subconscious associations.]

Now step through the portal

While working as a prototype sculptor, Josh was introduced to the magic of 3D printing. “I was very excited about the huge changes this would make possible, but the materials and machines weren’t user friendly. The idea was functional, but not ready for use.”

Then, in the late 90s a couple things happened that changed his life and the art world forever – 1) he started a design firm that gave him access to 3D printers and 2) the software got better.

While mesh based polygonal was not designed for what I wanted it to do, I started pushing it. You’d have to go through a crazy number of steps, like 12 programs to make something a 3D printer would understand… but the 3D printing technology was making huge jumps.

Josh points to his series called Tangle as the culmination of his search for a medium that would allow his vision to become real. He explains that for the first time he was able to create “the actual 3D version of what I had been doing with my drawings through automatism.” 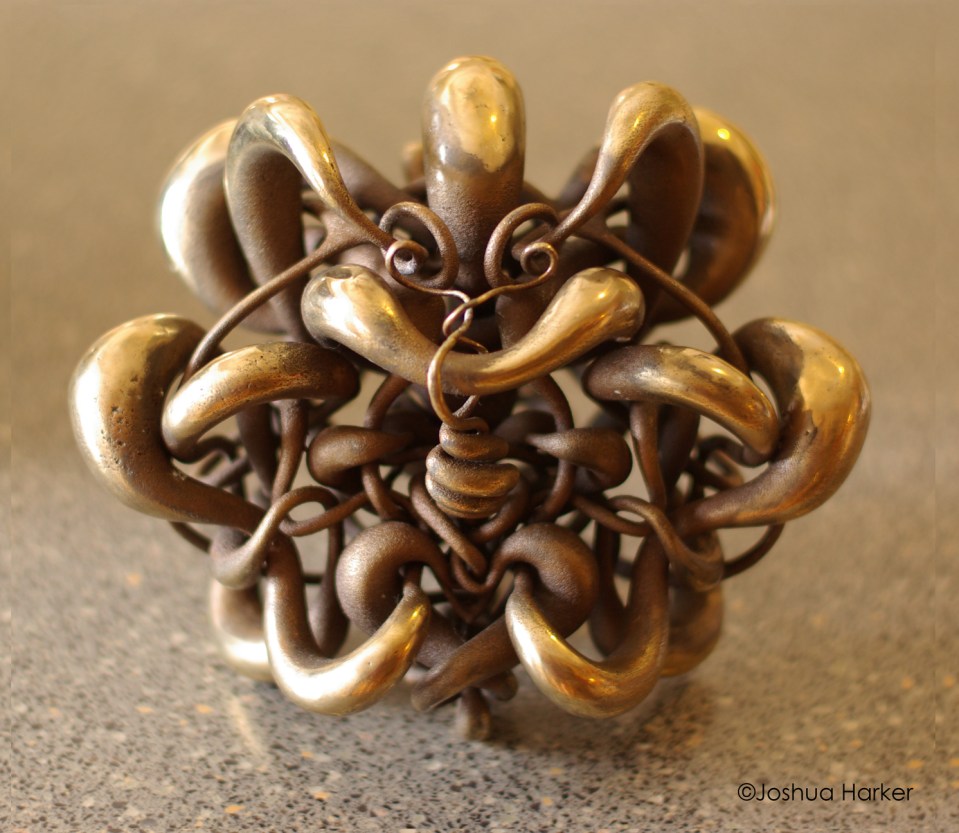 His use of 3D printing was the turning point in his journey as an artist,

It was the portal. I didn’t have to dream in 3D, create in 2D, then render in 3D. For an artist, it was a different process, it was sculpture, not drawing. It was and still is surrealist exploration.

Peel back the layers

And the result of that exploration is mind-blowing complexity, intricacy, and intimacy. Observe the first work from his five-piece series called Objectified. This piece, Unmentionables, represents the dehumanization of people, building on the narrative that our identify is created not only by who we actually are, but also how we choose to present ourselves and how those choices are interpreted by others. 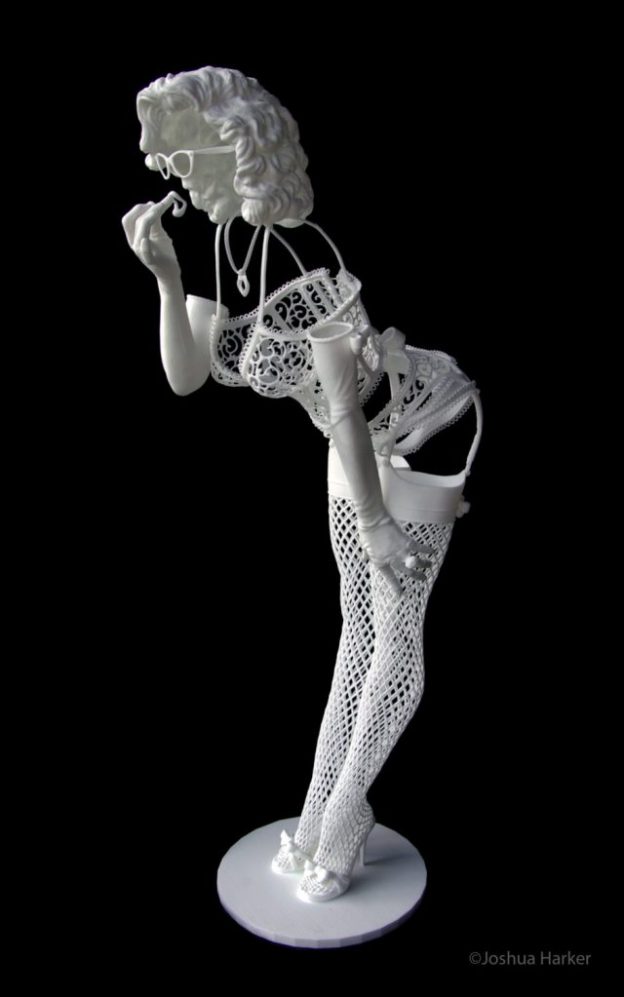 He says this work is achievable in other media, but it’s hard to imagine how. Possible or not, the process wouldn’t be as direct, because “instead of drawing things and jumping between 2D and 3D, I can stay in the same creative environment, play with poses, balance, look and proportion.”

When you talk to Josh, you get the sense that his brain is conceptualizing these pieces as fast as the synapses can fire. The 3D printing process lets him charge forward. He says,

I don’t have to work backwards, I can maintain all the details, maintain priority over subject matter, weight and gravity, just focus on the vision or narrative. With traditional media, I’d also be thinking about the challenges of trying to make it work. Here you have control throughout the entire process.

But there still are challenges. The pieces in the series use patterns of clothing to help tell the story. They have to be recognizable, because these are representational.” Josh pushed himself to design realistic, recognizable patterns that were able to produced and had structural integrity.

Pushing limits is what this self-proclaimed troublemaker does best, as you can see with his use of projection mapping to ease into the fourth dimension – time. “But I’m not seeking out new technology, I’m servicing a vision and projection mapping was another way to bring a new level of performance.” 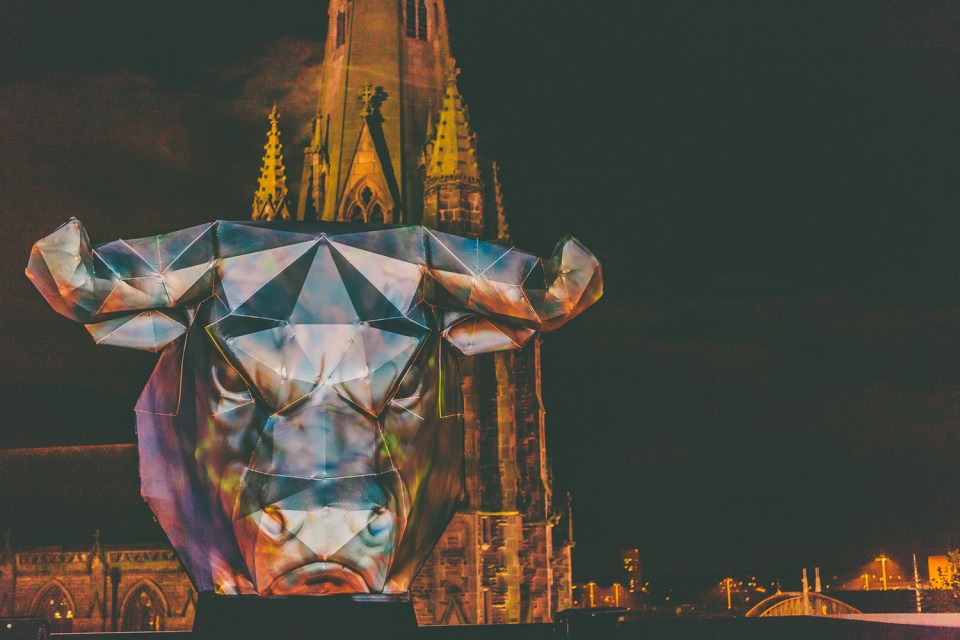 I had to ask then about the reality of “servicing a vision” and the challenges along the way. “You don’t know limitations until you try it. There are things that we want to do as humans, but we have no idea of whether they are possible.” He says that while we have the vision of our goal, we don’t always know how to get there. So you dream of planting a flag on the moon, then figure out how to do it.

And that thought brought us to where his art is heading next.

The virtual reality space is very cool, it allows us to do some things we never thought possible. Along with that, 3D printing will become more sophisticated and we’ll be able to do multi-material printing, printing circuitry into work, and mixing rubber and textures.

Visionaries like Josh Harker will always embrace advances in technology, then make unreasonable demands to push the boundaries. He is driven by impossibilities, and compelled to produce the unmakeable.