Even Elon can’t get us to Mars

Mars has long been and continues to be a frustratingly elusive dream for many an aerospace engineer, wannabe astronaut, or die hard Total Recall fan alike. It’s a subject many people including myself are deeply passionate about. And despite the nearly 50 years of technological progress since the Moon landing, we are arguably still rather ill-prepared to reach the Red Planet. That’s precisely why watching Elon’s recent Mars reveal in front of the International Astronautical Congress felt like an exasperatingly tragic lost opportunity. Perhaps about as aggravating as Arnold getting blown out of an action set piece to asphyxiate in a red wasteland, albeit without the insta-terraforming plot device to conveniently save the day. 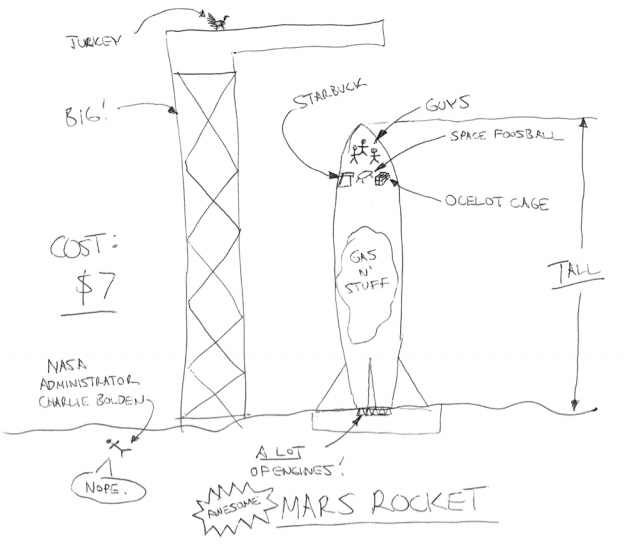 While it was clear that many Bothans died to bring us this SpaceX information on such a gloriously crafted slide deck and accompanying inspirational video, it was decidedly less clear why Elon nervously stumbled and stuttered through most of it like he had just woken up from a bad hangover. Understandably, perhaps he did indeed have trouble sleeping after the most recent SpaceX spontaneous disassembly. But even that misstep doesn’t justify this plan’s litany of tenuous assumptions.

The amount of lift generated by all that hand-waving alone might very well have gotten us halfway to parking orbit. So we’re left with pretty much the same plan every 10-year-old since Apollo has dutifully scribbled (the details of which are lovingly summarized in the title image minus the purple crayon).

Some of the most troubling assumptions about Elon’s not-so-fully-cooked Mars strategy:

Specifically complex failure, i.e. that scandalously bold first stage engine array, all 42 of them. The instancing of so many Raptor engines makes perfect sense from the perspective of keeping manufacturing cost low and development time short. Quick delivery of this next-gen methalox core boasting impressive specific impulse figures is imperative while the Musk financial house of cards continues to defy gravity.

I’ll ignore the obvious direct comparison to the Soviet N1 since that program is both ancient history and was notoriously rushed to the point that it set new standards for man-made explosions. But the underlying theme behind the failure of that program is relevant here: the challenge of ensuring overall system resiliency.

Specifically accounting for one or more engine failures or interactions with all the other engines, the number of off-design permutations that must be accounted for is troubling. In other words the control software for that puppy is going to be the stuff of nightmares. Improbability drive, indeed.

Now if you’re a card carrying Elon fan-boy, you might raise your hand here and explain that with the Falcon’s array of 9 Merlin engines this is a solved problem. But these permutations will scale exponentially, not linearly. At that level of complexity, root cause analysis can be extremely problematic and corrective actions can more easily spawn unintended consequences – a major problem for a highly reusable system. If SpaceX had proven confidence in a second data point, such as the Falcon Heavys configuration of 27 Merlins, that might instill a warmer feeling. But that data point does not yet exist. Even if it did, the Heavy’s configuration is essentially 3 Falcon’s strapped together (9x3).

The Mars rocket is sporting an entirely new array of 42. I hope you like explosions.

When rockets explode in pursuit of developing new technology, the response is universal - space is hard. You’re damn right space is hard. That’s why when you plan things in space you have to account for the fact that space will invariably kick you in the ass from time to time. As Neil deGrasse Tyson likes to say, the universe is trying to kill you.

So any plan that requires your giant rocket to return to this very specific point with absolute precision on a regular basis should account for the fact that occasionally it won’t, and thanks to its gigantic size could very likely trash the entire launch site and that ginormous space crane in the process. This has been hand-waved away by stating the new first stage will sport maneuvering thrusters and some magical large-tolerance-siphoning launch mount device. However, if you completely trash Pad 39a which, according to Elon, “NASA has been kind enough to allow us to use,” don’t be surprised if NASA tells their tenant, if you break it, you buy it.

When you start running the numbers on what it takes to eventually run up to even a fraction of 1,000 ships, with 3-5 fuel-loading launches per ship, capping out at 3-5K launches over a transit window of 26 months, it doesn’t look good. Ignoring most people’s distaste for occasionally blowing up 200 people at a time, you’re going to need worldwide infrastructure to remotely keep any reasonable (or unreasonable) pace. Where is that in the aggressive cost projection?

Assembly is a serious afterthought

One of the embarrassingly few intelligent questions to arise during the ultra-cringey Q&A parade of nonsense following the talk, came from Derrick Stamos of NASA Spaceflight.com, who asked where such a gigantic booster and spacecraft might be built and how it would be transported to the pad. Elon, apparently brainstorming on stage, surmised “So I think we would probably look at construction in multiple [Gulf] states and doing final assembly at the launch site.”

In the video the crane just conveniently picks up another giant upper stage, apparently reloaded from a magic treasure box just off screen. So much for design for assembly. You would think that with such fabulous Power Point slides, some real thought should have already been applied to this logistical challenge, especially considering final assembly and transportation can have a dramatic effect on turnaround time. A fleshed out concept is sorely needed here. You’re going to need your own equivalent of a VAB, perhaps even a whole city of them.

By the way, that’s not free.

Apparently getting killed is fun

Early adoption of this interplanetary transportation system is dependent on a wealthy contingent of adventurers willing to pay good money to quite possibly die at what is quoted as $200K a pop. Elon described the trip as “…gotta be really fun and exciting, can’t be cramped or boring… It will be really fun to go.” Promised are movies (mostly Total Recall, The Brave Little Toaster Goes to Mars and that really awful Mars movie with Val Kilmer), a restaurant (probably Arby’s), and even 0g sporting events…e.g. the Space Olympics.

At the same time, however, Elon describes that “The risk of fatality will be high. There’s just no way around it.”

How many wealthy aristocrats are willing to risk their lives for a Mars journey? To get an idea, keep in mind that Elon himself, who’s self-professed dream this all is, won’t be going himself even though he wants to put all his net worth on the vision. He has kids you know, and honestly I can’t blame him.

Newflash: most of the rich people who can afford the initial admission will have kids, or puppies, or domesticated ocelots even. “What do you mean I have to check my ocelot?”

There might be hopes in the children of some well-to-do titans of industry, who are looking for something brash to do to spite their parents, might have a robust sense of entitlement, and plenty of disposable income. I’m sure they’d make really great astronauts, being all patient and cool under pressure and all that. Let’s let them roughhouse with space sports right next to the giant window!

Excuse me while I curl into a fetal position by the airlock with my spacesuit on.

All joking aside, I do admire Elon Musk. It’s tough to put yourself on a limb for such a far-reaching vision. He is the closest approximation we have to a living Tony Stark. The progress achieved with both Tesla and SpaceX is undeniable and commands both respect and admiration, regardless of whether either can indeed prove sustainable market success. He’s helping to reinvent space, and that’s good. Elon’s modus operandi is to promise big, deliver something innovative, cover any shortcomings with a resplendent sheen of brand image, and create a distraction by a subsequent wave of big promises.

It’s worked reasonably up to this point, but Mars is where this approach is a bridge too far. That’s because he can’t do this by himself.

That’s the biggest disappointment here. If anyone were qualified enough to reach across agencies, governments, and even the planet to harbor some kind of cooperation to make this all a reality it could certainly be him. I really wish he could have been more motivational…maybe more people would listen and take to heart the true message and the title of the talk: Making Humans a Multiplanetary Species.

But the best thing he could come up with to afford it all and make it a reality: steal underpants. Every ten year old that looks up at the night sky probably agrees.